My writing space is almost set up. I was adamant when I bought my new house that as well as a bedroom for me and one for my son, there’d be a third room I could use as a study.

My old house was big. It was four bedrooms, and had an L-shaped lounge. There, one of the bedrooms was a library, and the computer lived in one part of the lounge. It was good then, because if my toddler was playing in the lounge or watching TV I could watch him while attempting to write (or, more likely, playing on social media). I wrote both of my Isla books there, and most of Lucid Dreaming.

This place is smaller. But I have my study. I had to put one bookshelf in the lounge because they wouldn’t all fit (and a smaller one in the dining room — yes, I have a lot of bookshelves). But the other five, and my computer desk, all tuck away quite nicely into my study.

There’s a view of our courtyard, and beyond that of the local park. And the study is far enough away from the lounge room that as my son grows older I won’t have to listen to him watch TV or play Final Fantasy XXIII on the Playstation 7.

As you can tell, I love it. It’s no isolated cottage at the end of a winding path, surrounded by flower gardens, but I did alright. ❤

So I know you guys have all been wondering where I was. Well, probably not, because if you read my blog at all you know I was about to move into my new house — and if you don’t, you wouldn’t care. 😉

I’ve been in the new place for five days and we only just got the PC set up and connected to the internet. I was a bit alarmed to find myself getting  twitchy and a little depressed about being sans PC. Even though I had my smart phone and access to social media, at least, I really felt the lack of access to the internet — and to word processing facilities.

Especially when I downloaded my emails yesterday and saw that my editor at Turquoise Morning Press SENT BACK THE FIRST ROUND OF EDITS ON ISLA’S INHERITANCE!

I haven’t cracked open the file yet — I’ll save that for when my little guy is in bed — but Shelby’s notes in the email were spot on. I’m really looking forward to getting stuck into them. (Make a note of when I said that, because I bet you $100 I’ll be suffering soon enough!)

I’m also beta reading a YA sci-fi by my friend Stacey, which I haven’t been able to touch for a week, so it’ll be good to get back into that too. The last time I read it was a climactic scene and having to wait has been killing me!

I’ve unpacked two and a half out of six bookshelves — I had to wait to do the rest till the PC was set up, in case we had to move furniture. It’s been fun reuniting with all my novels; once they are all out and looking fine I’ll post a photo of my study. I’m surrounded by books and have dual screens. And this is my view:

I’ve been struggling a bit the past couple of weeks. In my defence, I’ve had a lot going on: we (well, I) packed, then moved into my parents’ house, and then my son and I both got the flu. Now I’m house hunting, which involves spending every Saturday driving around, and dodging overly friendly real estate agents who suddenly lack any customer service skills when it actually matters.

This is why I haven’t been blogging much the last week or so. I’ve managed to meet my weekly writing goal, and even to catch up on what I should have written when I was too busy packing to write. But this last week I’ve been back at work and I’ve only met that goal by the skin of my teeth.

There are a few exciting things coming up though. I’ve got two AWESOME interviews lined up for Aussie Owned and Read in the next four weeks. One is with an Australian speculative fiction icon, and the other with a hot new (relatively speaking) Aussie writer. Stay tuned for details!

I’ve also got an excerpt of a new release, and a gorgeous cover reveal. It will BLOW YOUR MIND!

Plus my contribution to The Zombie Project goes live on Sunday 8 September. Yes, that’s the day after the Australian federal election. (Seems appropriate somehow.)

Don’t know what The Zombie Project is? A bunch of fantastic writers (and also me), brought together by Twitter and a love of braaiiiins, are doing a collaborative short story project.  Instead of just being your typical anthology, the stories are all set in the same world. The only rule is that each story must contain an element from the preceding one.

Awesome, right? The stories are being posted at Chynna-Blue Ink — scroll down to the first and then read them in order.

Go on. Why are you still reading this? Shoo!

After a week and a half of packing and more packing, and then moving and more moving, my son and I are out of the place that’s been our home for the last three years. I wish I could say I was emotional about it, but the only emotion I feel is relief.

Maybe that’s a side effect of packing a four-bedroom house on your own. The exhaustion leaves no room for anything else.

We’re temporarily staying at my parents’ place for the next month or so. They are out of the country, so it’s just my boy and I. He’s sleeping in what was my childhood bedroom. I’m in my sister’s old room (the latter was fully furnished, and I figured my son would adapt better if he had his own bedroom furniture).

We won’t be here for long, but it really felt like coming home.

I don’t think most adults learn their neighbourhoods the way a child does. Kids explore all the back alleys and parks during their romps; they know where the blackberry bushes grow over the fence to be plundered, or where the plum trees are. They know which path to avoid in spring when the magpies are swooping, exactly how the tree trunk at the local park can double as a rocketship, and where to find willow fronds to weave into headbands.

I think I’m going to miss this place when I move, possibly more even than the house I just sold. Don’t get me wrong. I loved that house. It was beautiful and spacious. But it was also the source of a lot of stress–my ex-housemate and I regularly joked that its extension had been built on a hellmouth.

As a result of all the packing and moving, I haven’t written in two weeks. I’m starting to feel extremely twitchy, especially as my WIP is at the point where I’m about to write the final confrontation. I was really looking forward to it, too. Of course, Murphy’s Law being what it is, I got sick halfway through the move, so I’ve had to hold off a few more days–at least until the fever subsided.

But you know what? When I get to write again, that’s going to feel like coming home too.

Moving myself, my son and my book babies

As my long-time reader will know, I’ve been trying to sell my house for months. Well, we’re all systems go; the house finally sold. Settlement is at the start of August, but my son and I are moving into my parents’ place next weekend, until we can find our new, downsized home…

…which still needs to be big enough to hold not only two humans, but my study (which has a big writing desk) and a whole lot of books. 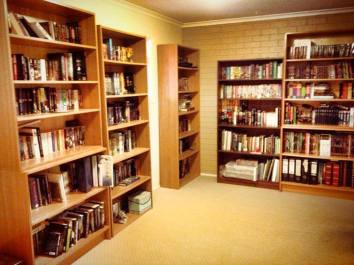 At least once we set up in the new place I can make sure the bookshelves are correctly paired together. This random jumble has been bothering me for years!

It also means that I spent an entire day packing over 30 boxes of books. I did keep a few out to read over the next couple of months, but I feel weird about seeing the rest of my cherished collection packed away. 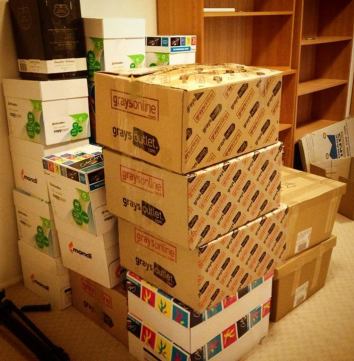 These books aren’t all mine. Two of the boxes belong to my son. :p

Now I guess I’d better pack the rest of the house!

Anyway, that’s why I’ll be semi-MIA on the blog over the next week and a bit. However, a few excellent folks are providing guest posts, so you won’t be totally neglected! And I’ll still be around on social media … no doubt whinging about packing. 😉

I made a huge decision last night: I decided to sell my house and downsize to something smaller, something my three-year-old and I don’t rattle around in like marbles in a bathtub. I love my current house, but the mortgage is costing me the GDP of a small African nation.

So I’ve been looking at real estate websites, trying to get myself excited at the idea of moving somewhere that’s Not Here, and I decided one of my criteria is that I need a little bit of space for just me in the house. Either a study or a living area that’s not right next to the television—in other words, somewhere I can set up the computer and write in peace.

Some people would say that’s self-indulgent. I’d save more money getting us a tiny two-bedroom apartment. But I think it’s required for my sanity, and if I can do it I should.

(I’ve also got five bookshelves worth of books I need to accommodate. Don’t ask me to part with them!)

All of this got me to thinking. What do other writers work with? What’s your current space like? Is it ideal, or are there things you’d change if you could? Do you have to write with noise-cancelling headphones to ignore the chaos around you? Or write on your laptop in your room with the door locked? 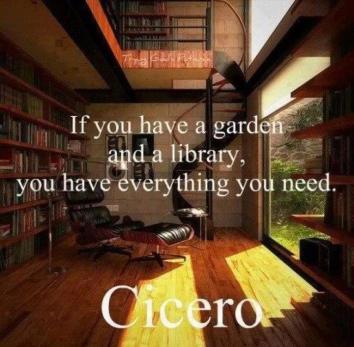