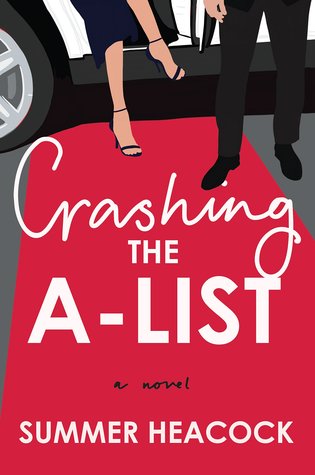 After four months of unemployment, former book editor Clara Montgomery is still stuck sleeping on her little brother’s ugly couch in Queens. Determined to keep her minuscule savings account intact, she takes a job clearing out abandoned storage units, but is in no way prepared for stumbling upon dead snakes or trying to identify exactly where the perpetual stench of beets is emanating from.

When Clara comes across a unit that was once owned by an escort service, she finds the brothel “résumé” of a younger Caspian Tiddleswich… an astonishingly famous British actor. Her best friend thinks she should sell the gossip to a tabloid to fund her way off the couch from hell, but Clara instead manages to track down Caspian’s contact info, intending to reassure him that her lips are sealed.

Unfortunately, Caspian misinterprets Clara’s attempt at altruism and shows up on her doorstep, accusing her of blackmail. When the paparazzi capture a photo of them together, Caspian’s PR team sees an opportunity to promote his latest film—and if Clara wants to atone for her “crimes,” she’ll have to play along. Pretending to be Caspian’s girlfriend seems like it will be a tolerable, if somewhat daunting, penance … until their fake romance becomes something more than either of them expected.

This was another one of the books I read on my cruise last month, and the only one I read in paperback (which is why I’ve got a picture of it on the balcony of my stateroom at the bottom of this review!).

I’ve been excited for this book since I first heard about it; I read and loved Summer’s The Awkward Path to Getting Lucky, and was looking forward to more of that awkward humour. And there is a lot of awkward humour in this story — the whole inciting event is basically the main character, Clara, getting drunk and calling a celebrity to reassure him that his secret is safe with her. She doesn’t remember doing it afterwards, and is therefore very shocked when he shows up at her door.

She’s even more shocked that he thinks she’s blackmailing her … but not as shocked as poor Caspian must be that Clara is, he thinks, about to destroy his life.

This chick lit has the sort of romance that goes from hate to love, although the arc does involve a few more bouts of hate in amongst the love parts. Despite the way Caspian treats Clara at times, it’s clear from very early on that he is actually a good person who is scared and feels trapped. That doesn’t excuse some of his behaviour, something that Clara thankfully holds him to account for — if she hadn’t, I’d have been disappointed, but Clara is nobody’s doormat.

This book definitely has the “what can go wrong will go wrong” aspects of Summer’s previous novel, but the stakes felt a lot higher in this book than in Getting Lucky. I think I had a bit of a crush on Caspian myself by the time that Clara did — despite my indifference to Benedict Cumberbatch, the clear inspiration for the character — so every time something came up that threw a spanner in the works, I was all nooooooooo.

Crashing the A-List was a wonderful holiday read that kept me up too late and made me laugh, swoon and tear up a little. Get it in your eyeballs. 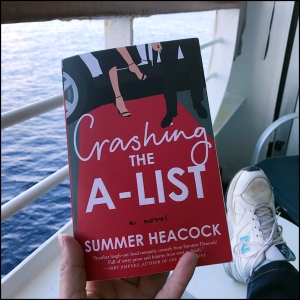