So I know you guys have all been wondering where I was. Well, probably not, because if you read my blog at all you know I was about to move into my new house — and if you don’t, you wouldn’t care. 😉

I’ve been in the new place for five days and we only just got the PC set up and connected to the internet. I was a bit alarmed to find myself getting  twitchy and a little depressed about being sans PC. Even though I had my smart phone and access to social media, at least, I really felt the lack of access to the internet — and to word processing facilities.

Especially when I downloaded my emails yesterday and saw that my editor at Turquoise Morning Press SENT BACK THE FIRST ROUND OF EDITS ON ISLA’S INHERITANCE!

I haven’t cracked open the file yet — I’ll save that for when my little guy is in bed — but Shelby’s notes in the email were spot on. I’m really looking forward to getting stuck into them. (Make a note of when I said that, because I bet you $100 I’ll be suffering soon enough!)

I’m also beta reading a YA sci-fi by my friend Stacey, which I haven’t been able to touch for a week, so it’ll be good to get back into that too. The last time I read it was a climactic scene and having to wait has been killing me!

I’ve unpacked two and a half out of six bookshelves — I had to wait to do the rest till the PC was set up, in case we had to move furniture. It’s been fun reuniting with all my novels; once they are all out and looking fine I’ll post a photo of my study. I’m surrounded by books and have dual screens. And this is my view: 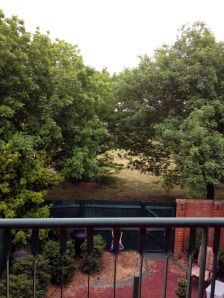 I’ve been up since 5.30am (it’s now 7.22am as I write this, and I’m about to leave for work). So this is a bit of a rambling post. Please forgive any incoherent bits. 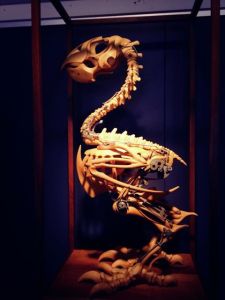 This is completely unrelated, but here’s a photo of a carved timber-and-metal raptor I saw at a woodworking showroom last weekend. It’s only $15k – buy it for me? 🙂

A few months ago I blogged about the importance of critique partners. I talked about the different approaches to getting feedback—whether you’re a perfectionist who edits your work before letting others read it, or whether you’re a sharer who is happy to let people see it and provide feedback when it’s still in its raw state.

I’ve done a little of both with my three manuscripts. But yesterday I just sent my latest manuscript, Lucid Dreaming, to my beta readers after a pretty thorough edit. Two of these beta readers haven’t read for me before, which made me even more anxious about them seeing my writing. Also, all of my beta readers are sheer awesome, which is a little daunting.

Of course, last night I couldn’t sleep. I felt all adrift. These are the classic signs that I need to embark on another project, to keep myself busy and not fretting. (Have they opened the document yet? Do they hate the first chapter? What if they notice that I’m  faking it?) I have edits of Isla’s Oath to get on with, but I printed the manuscript before I moved temporarily into my parents’ house, and then, like an idiot, put it in a box. So that’s going to have to wait till we move into our new home—which is in about a fortnight.

Once I’m done with Isla’s Oath, the plan is to start on the third book in the trilogy. So I need to do some plotting there too.

I’ve spruiked The Zombie Project a few times here, and posted my short. If you want to read the whole set but can’t be bothered looking for all the stories, the amazing Chynna-Blue has put up a master post that details all of the contributors thus far, and links to the stories.

So now there’s no excuse. :p

(Spruiking is Australian slang for speaking in public, usually trying to promote or sell something. If you’re wondering.)

I’ve already contacted the ISP to start the process of getting broadband set up for the new house. But it could take weeks, and I can’t blog from work—so I’m looking at scheduling a bunch of posts for the next few weeks. If you are interested in writing a guest post or being interviewed, drop me a line at cassandrapage01_at_gmail.com (replace _at_ with @). The only catch is I’d need your post/answers by about 4 October at the latest.

The secret writer: an artist’s impression

I’ve always been a bit cagey about my writing. When I’m drafting something, I don’t let anyone read my work, mostly because all first drafts suck. At least, this is what other writers tell me, and I’m clinging to it as a basic fact of the universe. Like atoms and dark matter and the fact you can’t get a car park at the mall two days before Christmas.

At first I wouldn’t even talk to my loved ones about my novel, so sure was I the whole thing was going to be an abject failure—although I’m starting to get over that now. Several of my nearest and dearest have now read my (edited) manuscript and given me excellent feedback. And recently—because you should never trust your nearest and dearest to be honest with you, even though I think (hope!) mine were—I also sent it to a lovely girl named Blue, who I met on Twitter. She’s giving it a beta read for me. (If you have Twitter, you should follow her: @jordonchynna).

All this feedback—especially from people who don’t love you—is important for a healthy manuscript that doesn’t make you want to throw up into your mouth. But remember, I’m a secret writer. I only gave myself permission to call myself a writer after I’d finished my first manuscript. Before that I was just a girl with a weird, reclusive habit that her boyfriend was kind enough to support.

So what is the point of this ramble? When I created my blog and put up that first post, I went to link it on my personal Facebook page, so that all my friends could read it if they wanted to. It’s the sensible thing to do, right? I’ve read marketing blogs and stuff; it was reading Bad Redhead Media that got me onto Twitter in the first place. It’s all about the non-spammy promotion and cross-promotion, and blahblahblah.

So I dutifully pasted the link onto my Facebook status, and wrote some words to go with it … and then I fiddled with the privacy settings so that only those who already know I’ve been writing could see it. I chickened out. Feel free to make clucking chicken noises at me.

Ok, you can stop now…

Sharing that I’ve written a novel with all those old friends and colleagues feels a bit like the idea of a high school reunion: the only way I want to go to that badly decorated function hall and eat lukewarm buffet food is if I can hold my head high and  show everyone what a massive success I am. With my fancy car and diamonds on the souls of my shoes or whatever. Except that in this case I have no excuse because the people I’m friends with on Facebook are not the bitchy girls that picked on me in school.

It could be because I am an introvert, or it could just be that I’ve always been a secret writer and old habits die hard. I know I need to get over it. It’s on my list of things to do. Maybe as a new year’s resolution. At the end of 2013. Maybe.