← Book launch: ‘Kiya: Mother of a King’
Meanwhile, over at Aussie Owned and Read… → 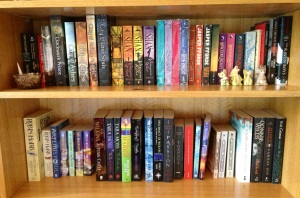 My writing space is almost set up. I was adamant when I bought my new house that as well as a bedroom for me and one for my son, there’d be a third room I could use as a study.

My old house was big. It was four bedrooms, and had an L-shaped lounge. There, one of the bedrooms was a library, and the computer lived in one part of the lounge. It was good then, because if my toddler was playing in the lounge or watching TV I could watch him while attempting to write (or, more likely, playing on social media). I wrote both of my Isla books there, and most of Lucid Dreaming.

This place is smaller. But I have my study. I had to put one bookshelf in the lounge because they wouldn’t all fit (and a smaller one in the dining room — yes, I have a lot of bookshelves). But the other five, and my computer desk, all tuck away quite nicely into my study.

There’s a view of our courtyard, and beyond that of the local park. And the study is far enough away from the lounge room that as my son grows older I won’t have to listen to him watch TV or play Final Fantasy XXIII on the Playstation 7.

As you can tell, I love it. It’s no isolated cottage at the end of a winding path, surrounded by flower gardens, but I did alright. ❤