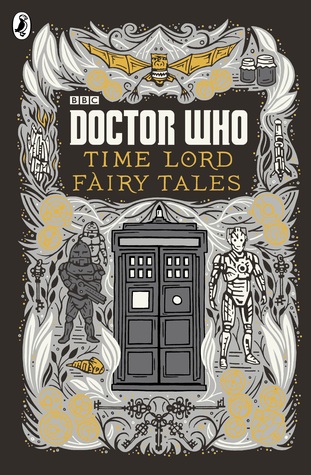 WE ARE ALL STORIES, IN THE END…

Fifteen tales of ancient wonder and mystery, passed down through generations of Time Lords.

Dark, beautiful and twisted, these stories are filled with nightmarish terrors and heroic triumphs, from across all of time and space.

The first thing you need to know about this book is that — despite the name — the stories aren’t Time Lord fairy tales in the strictest sense. They aren’t fairy tales that Time Lords (the race of aliens that the Doctor is) tell their kids. Instead, these are retellings of traditional fairy tales, but as if they were told in the world of Doctor Who. There are five with the Doctor actually in them (Two, Nine, Ten and Eleven, from memory), and a bunch of others that feature the various alien races from the show.

The stories are, sadly, variable. Some of them are clever, a little unpredictable, and feature cameos from beloved characters. (For example, the lead character from ‘Little Rose Riding Hood’ is a younger version of Rose Tyler.) Others are kind of bland. I don’t know what fairy tale ‘The Twins in the Wood’ is based off, but despite that I found the story utterly predictable — it suffered from having no stakes whatsoever.

Still, the good stories did outnumber the bad ones, and if you’re a fan of Who, then the book is worth a read for ‘The Scruffy Piper‘ and ‘The Grief Collector’ alone. (Also, the hardcover is totally gorgeous, if a book’s aesthetic is important to you.)

If you’re not a fan of Who, read the Begin, End, Begin anthology instead — you won’t regret it.

A long time ago (long enough ago that we missed 2014), I did a blog post on the various search terms people have used to find my website, singling out those searches that I suspect my content was unable to help with. I decided it was time for an update. Because I’m a giver.

Because they are young and spry, and how can the rest of us old people compete with that? I mean, how can we?! I had a karate grading on the weekend, and there were these young’uns who were doing kicks above their heads, when I could barely kick above my knee. (Of course, their heads were down around my knees, but still*.)

Seriously, I have no idea. Still, if it’s an all-ages talent show, maybe you should just get over it and move on?

subject of books written in past

There … were rather a lot. I think we need to narrow this down a little. I mean, how far in the past are we talking? Early on, religion featured rather heavily, but subjects have broadened out somewhat in modern times. And by somewhat I mean that if you can think of it, there’s a book that’s been written on it.

HELLS YES. She’s the most maligned of the Doctor’s companions, but I loved her so much. Not as much as Donna, but, you know, a lot. I really felt for her. She was fiercely intelligent in her own right, stubborn and brave. Sure, she fell in love with Ten, but have you seen David Tennant? Besides, he swept in, saved the day and pashed her in the course of the adventure. My ovaries would explode on the spot!

I can see where you’re going here, but if you’re considering writing erotica, maybe steer clear of too many adverbs? Still, here are a few to get you started:

Okay, maybe not moistly. Still, you do you.

how to research a city for a fiction novel

I used Wikipedia a lot. And Google Maps. Seriously, that thing is a gift — when I was writing a scene in Melpomene’s Daughter that takes place in London, I actually found the street that the characters were standing on, and then used Google street view so that I could describe it properly. Google Maps is a gift to writers.

I’m so flattered and pleased that you asked. I never asked for this honour of supreme lordship over you, and it’s a heavy burden, but of course I will accept.

The other day I was reading a blog post about Amy Pond, the first companion to the eleventh Doctor in Doctor Who. The blogger’s contention was that although Amy was awesome, in and of herself, the plotlines she was given were awful because they all rotated around Amy as Woman — a love triangle, a marriage, a baby.

I’ve seen this argument made many times and I’m inclined to agree, although I still really enjoyed Amy and Eleven. (Rory was a bit wet, but he grew on me.)

In the comments to this post, the consensus was that the superior companion in the reboot was Donna, because she wasn’t defined by her relationship to the Doctor, unlike Rose (who he fell in love with) and Martha (who fell in love with him). These comments were all written back before Clara and Twelve, so she didn’t factor into the debate.

Now, Donna is far and away my favourite, because of her strength of personality, heart, and the amazing character growth she experiences. Of all the companions, she had the most tragic end to her story. I mean, Rose’s was sad as far as it went, but then she got a clone of Ten to shack up with, and who wouldn’t be happy with that?! Donna lost everything. All that growth. All those experiences. I honestly think she would’ve preferred to die. *sob*

On the other hand, I think Martha deserves a little more credit. She was fiercely intelligent in her own right, stubborn and brave. Sure, she fell in love with Ten, but have you seen David Tennant? Besides, he swept in, saved the day and pashed her in the course of the adventure. My ovaries would have exploded on the spot!

Martha didn’t just swan around after the Doctor and sigh. She didn’t pine (unlike Rose). She loved him, but once she realised he was never going to love her, she was independent-minded enough, smart enough, to realise that continuing to be around him was actually bad for her. Because she knew she wanted a partner — which not all women do, I grant you, but she did — and he would never be it.

I found Martha’s departure from Doctor Who to be uplifting, unlike all the others so far. Every time I see that scene, I clap. Because she did it with dignity.

Today’s Top Ten Tuesday is the top ten favourite movies or television shows. I’ve gone for the latter, although I only have five shows that I really love. I just don’t watch that much television; there are shows I’ve enjoyed that I haven’t managed to keep up on (like True Blood, Dexter or Once Upon a Time), and I figure if I haven’t seen all of a show, or I lost track of it, I must not love it that much.

Of the ones I have, let’s be honest, most of them are by Joss Whedon. (I could have also added Dollhouse to the below, but I decided to stick to my two Joss favourites, instead of three!)

Buffy: the Vampire Slayer. I actually just re-watched some Buffy the other day, because a friend wanted to pull out Once More With Feeling, the musical episode. We ended up seeing a few other episodes from season six as well, which if you’ve seen the entire series you’ll know is the darkest. Some people write off this show as pure teen angst with wrinkly-faced vampires, but it explores some deep issues while still making you care about the characters. For example, season six explores self-harm as a major theme, via Buffy’s relationship with Spike, and looks at rape, misogyny and drugs. Wow.

Firefly. Another Joss Whedon show, this one ended too soon…although at least we got the follow-on movie, Serenity, to give us a little bit of closure. Firefly is part sci-fi, part western, and has a delightful mix of Chinese and American culture because this future society is a melting pot of the two. Love it. My favourite episodes are the two where you really get to see how dark the lead character, Mal (played by Nathan Fillion), can be. If you’re curious, they are War Stories and Ariel.

Doctor Who. The reboot doesn’t have the charm of dodgy special effects that the original did, but what it does have is clever writing. I’ve heard people criticise the later episodes for trying to be too clever but I haven’t felt that way (although I am partway through re-watching season five to see if I can unravel things better the second time around). Some episodes fall a little flat — unfortunately I felt the last Matt Smith episode was one of these — but for the most part this is a great show. My favourite episodes are Midnight and Waters of Mars (both David Tennant episodes).

Castle. I don’t mind the old whodunit cop show (although I lean more toward Law and Order than CSI). I confess I started watching Castle because it had Nathan Fillion in it, but I love the nerdy banter. Clever dialogue wins every time. I don’t really have a favourite episode, although the one where Beckett and Castle finally got together was a highlight, as is any episode where the scriptwriters make a Firefly in-joke.

The West Wing. Speaking of clever dialogue… everything I know about US politics I learned from The West Wing. This is probably the cleverest show I’ve ever seen. It’s got an interesting style in that it doesn’t follow the details of the characters’ lives, just dips in and out as they intersect with their jobs. I guess in that way it’s more like a cop show, where you are mostly focused on the job, not the people. My favourite episode is the cliffhanger, from the end of the first season (What Kind of Day Has It Been) to the start of the second (In the Shadow of Two Gunmen). Mostly because of the scene in the hospital, and getting to see a limousine do a handbrake turn on a highway.

In the title of the blog I promised you a confession, and it’s this: I really, really can’t get into Game of Thrones. I mean, on paper I should love it: an epic fantasy TV series that has ANIMATED DRAGONS IN IT! But I didn’t really like the first book (it was a DNF for me), and when I tried to watch the TV show I didn’t get past the end of the first episode. I wasn’t really okay with them pushing a small boy out a tower window. Yes, I know they’re the bad guys, but that’s NOT THE POINT. It may be because I have a small boy who loves to climb, but I just couldn’t get on board.

What are your favourite TV shows — the ones you’ve seen every episode of?