← Cover Reveal and Excerpt: ‘Finding Home’ by Lauren K. McKellar
Excerpt from ‘Possession’ by J. Elizabeth Hill, and a giveaway →

I was just browsing the various search terms people have used to find my blog. I suspect many of them went away without knowing the answers they were seeking, so here is a post that attempts to remedy that for at least some of them.

In a battle between myself and the main character of Isla’s Inheritance, she would win. As well as having Powerz (TM), she’s also seventeen and spry. I am not seventeen. Nor am I spry.

will kiya hope of the phraoh be available on amazon uk

I checked with the author and it already is. Here ya go! 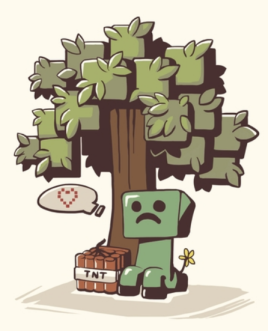 How kind of you to notice. My hair is brought to you by bobby pins and a pony tail. My clothes are courtesy of “whatever jeans I can find that fit my epic shortness”, and “the internet for cool geek t-shirts”. Currently I’m wearing a Minecraf t-shirt courtesy of Threadless (see right).

I’m unclear due to the lack of grammar, but if you’re asking me if I think girls smoking is sexy, the answer is no. Eau de ashtray is not for me.

If you’re looking for a picture of a girl smoking something sexy, or the abstract notion of “sexy” itself, I can’t help you … but I doubt it’s hygenic. Just saying.

“The past, the present and the future walked into a bar. It was tense.”

That’s my favourite. What’s yours?

when writing dialogue is there a comma after said when an adverb is used?

No. But may I urge you to reconsider using the adverb?

poem about a me and my dog with adverbs

Ok, and that’s my daily allocation of adverbs consumed. I’ll have to finish it another time.

words to edit out of a novel heard

That’s a pretty good suggestion to add to my list of words to be wary of, actually. Why say,

“I heard an eagle shriek.”

when you can say:

grow out your hair

I tried but it didn’t work. Really, I tried for about ten years! I just had it cut back to shoulder length and it’s much healthier and more managable. Thanks for the advice, though.

fantasy book with isla as a character