← Review: ‘All Fall Down’ by Ellie Marney
Review: ‘Greythorne’ by L.M. Merrington →

Review: ‘All the Little Bones’ by Ellie Marney 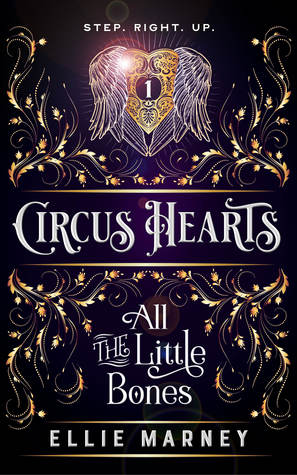 Seventeen-year-old Sorsha Neary’s life is changed in one night when she defends herself behind the vans of her family circus troupe. Now Sorsha and apprentice strongman Colm Mackay are travelling south, to evade the fallout and escape the long arm of the law. All they have in their favour is talent, an old promise, and slim acquaintance with the crew members and performers of their new home, Klatsch’s Karnival. But the question for Sorsha and Colm isn’t if the police will catch up with them, but when…

Dark YA romance, with a criminal twist – Circus Hearts: Step. Right. Up.

I’ve read Ellie Marney’s Every trilogy (you can read the reviews of those books here) but I didn’t realise that she’d also self-published a trilogy of books set in a circus until recently. When I saw them, I had to snap the first book up. I read it recently, during a reading binge while I was on holidays, and then I had to download the second and third books the next time I had internet access because I was so captivated by the first one.

I thought about reviewing all three in one post, because I read them back-to-back and all of my thoughts about them are a bit jumbled up, but I’ll try to unpick them and be coherent about All the Little Bones specifically.

The story is told from the perspective of 17-year-old trapeze artist Sorsha, who from the first line is clearly running from a trauma that she doesn’t want to dwell on and that she’s been pushed to duck responsibility for. The trauma is fresh, and she’s still in the “nightmares and vomiting” stage of coping with it. Poor thing. I just wanted to give her hugs, cookies, and the name of a rock solid therapist and lawyer.

Beside her is Colm, who is sweet and supportive, throwing away everything he had and taking literal beatings to keep Sorsha safe. He is adorable and a great fit for her; her healing process throughout the story is in part due to him.

Still, despite the romance sub-plot, this isn’t a romance genre novel — although boy howdy, can Marney write a kissing scene! Sorsha and Colm start out clearly attracted to one another, and there’s no big, contrived fall-out between them to generate plot partway through (which is my least favourite romance genre trope). I’d describe Every as a young adult crime series rather than a romance one. All the Little Bones is a little less crime-focused in that the crimes take place before the book starts; it’s more focused on the aftermath.

And it’s focused on the circus! I loved that as a setting — it, as much as Marney’s gorgeous prose, is what made me gobble up this book and spend my mobile phone data downloading the next two. I love the glitz and glam, the behind-the-scenes action, the second-hand thrill of performing (which I’d hate in real life, let’s be real). It was so much fun to read about.

Definitely check this one out.