Review: ‘The Secret Science of Magic’ by Melissa Keil

Sophia is smart, like genius-calculator-brain smart. But there are some things no amount of genius can prepare you for, and the messiness of real life is one of them. When everything she knows is falling apart, how can she crack the puzzle of what to do with her life?

Joshua spends his time honing magic tricks and planning how to win Sophia’s heart. But when your best trick is making schoolwork disappear, how do you possibly romance a genius?

In life and love, timing is everything.

I know I’ve said this before (possibly in my last review of a Melissa Keil book), but I want to be Melissa Keil when I grow up. She writes the most amazingly geeky and relatable (to me) characters.

In The Secret Science of Magic, we have Sophia, a maths genius and Doctor Who fan who has all the hallmarks of being on the autism spectrum disorder (although she is bafflingly never diagnosed), along with a massive helping of anxiety attacks and self-doubt (presumably from the lack of diagnosis and treatment). She’s also a POC, although her family is very “Australian” as far as I can tell — if there were any elements from other cultures in there I missed them.

Sophia is struggling through the last year of high school, trying very hard not to think about her only friend’s impending departure to study medicine in the US. She’s acing most of her classes and doing university-level maths on the side, but was pressured into doing drama, which she hates and is terrible at. She has fixated on a Russian maths genius who went off the rails, trying, in her methodical way, to figure out where he went wrong so that she can avoid it — a bit like Hazel in The Fault in Our Stars, but without the road trip.

Elsie, Sophia’s best friend, is from a largish South Asian family, with three brothers who look lout for Sophia the way her own brother generally doesn’t. But there is growing tension there, which Sophia doesn’t really understand. The clues are all there, not just for the reader (as is often the case) but for Sophia too — the problem is that Sophia simply doesn’t know how to recognise or interpret them.

(I’m so mad at Sophia’s counsellor, by the way. We never actually see said counsellor, but surely if they were halfway competent they could have recognised what was going on with her! Gah!)

Joshua, the other point of view character, has a long-standing crush on Sophia, a lisp that emerges when he’s anxious, and a talent for magic tricks. He decides to finally start wooing her, getting her attention with tricks that are mostly cute and motivated by a desire to help her with her various problems, but that sometimes cross the line for me (for example when he stole her watch; even though she did get it back later, that was uncool, Joshua!). Happily, he does grow over the course of the book and, by the end, he comes good. 😉

I really enjoyed this story, which — more broadly — tackles the YA issues of “coping with the end of school” and “what next”, as well as the universal human issue of self-acceptance. The romance was tentative and sweet, and my heart broke for Sophia and her confusion and social anxiety. The Doctor Who references made me happy, and Josh’s various magic tricks, while not really my thing, made me smile.

Melissa Keil’s books are ones I wish I’d had as a teenager; I’m totally buying copies for my friends’ geeky pre-teen when she’s a few years older. 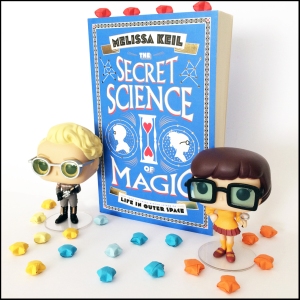