← Review: ‘Out of the Shadows’ by Ashlee Nicole Bye
Review: ‘The Secret Science of Magic’ by Melissa Keil →

I’m so excited to be able to finally show you the cover for False Awakening, the second book in the Lucid Dreaming duology, my adult urban fantasy series. Kim Last of KILA Designs has designed all of my current book covers, and I love each one more than the last (IT HAS A DREAM CATCHER ON IT).

I can’t wait till I can hold this one, and maybe pat and fondle it a little.

So, without further ado, here they are! But don’t just look at the pretties; while you’re here, check out an excerpt below. 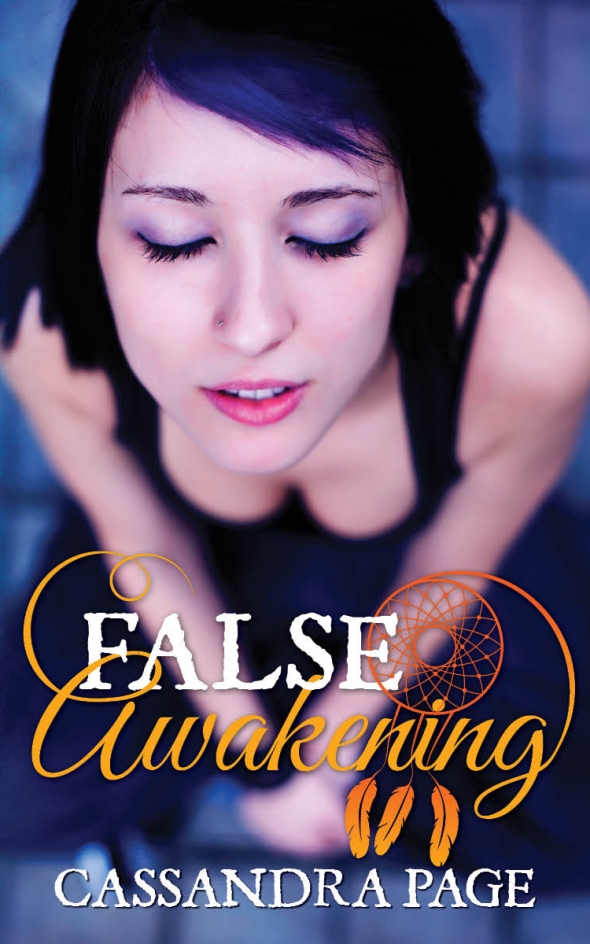 Usually when I stepped into someone’s dreams just after they’d fallen asleep, I didn’t arrive in an active dream so much as in a place of significance in their subconscious: a proto-dream of sorts. The kind of place they’d have recurring dreams about. As a lucid dreamer, I didn’t have true recurring dreams—deliberately conjuring dreams of my favourite places didn’t count. But I was familiar with the concept. Jen had told me that, usually, when she remembered her dreams, she found they contained elements of her family home. Brad often dreamed of his grandparents’ house, where he’d spent a lot of time as a child.

That was why, when I appeared in a brightly lit department store, I raised my eyebrows. Huh. First job, maybe? I stood in an aisle full of bags of confectionary: liquorice sticks, mixed lollies, chocolate drops. But, in the fashion of dreams, everything was slightly off. When I focused on a rustling purple and yellow packet, trying to make out the brand name, the logo slid away from my gaze as if it didn’t want to be nailed down. Price tags were illegible: smeared or written in gibberish characters. And when I looked between the packages I didn’t see a backboard filled with mounting holes but sheer, impenetrable darkness.

The darkness gaped back at me.

With goosebumps shivering along the length of my forearms, I took a moment to prepare myself, sparing a thought and a shred of energy to conjure my set of trusty motorcycle leathers. I didn’t have any such thing in the real world, but in dreams I’d found they served quite well as armour against the barbs on a blight’s tentacles. A clear-faced, round helmet made me feel like an idiot but protected my eyes. I didn’t know for certain that there was a blight here, but something was definitely not right. Even if it was just a creepy manifestation of Daniel’s subconscious—even if he was indeed going crazy—it paid to be careful. Ephemera could still have teeth.

I crept towards the end of the aisle, leather squeaking faintly as I listened for the telltale bubbling hiss of a blight. Peering past a stand of round-bellied plastic animals stuffed with jellybeans, I saw a row of unattended registers to my left. To my right, clothes swayed in a breeze I couldn’t feel. In front of me was the store’s main entrance: the roller shutter was down, allowing the vague impression of a darkened mall beyond.

Deserted apartment stores were bloody creepy. Even ones with the lights on. Still, this didn’t look like a place a blight had trashed. Brad’s had shredded the surface of his dream, tearing holes in walls and coating everything with a mess that would do a slimy Ghostbusters spectre proud. This store was creepy, but trashed? No.

Like my thought made it happen, a corner of the store went dark as one fluorescent light, then another, went out with a pop and a tinkle of glass onto tile. “What the…?” I whispered, looking up.

That was when I spotted the blight.

It hung upside down from the ceiling, somewhere above the menswear section, like a deranged bat a few feet wide, made of smog. Its tentacles were jammed deep into the rectangular ceiling tiles; the tiles themselves were slick with an oily coating of blight ichor that dripped downwards, spattering across a garish display of novelty ties that hurt my eyes.

“Gross,” I said, my voice somewhat muffled behind the helmet’s faceplate. The blight turned, rotating slowly until its stained yellow eyes glared down at me.

“I was talking about those ties, but you’re gross too. You look like an evil Christmas ornament up there, you know.” I gathered power around my hands, threads of blue-white lightning encircling my wrists and licking down my fingers. The fine hairs on the back of my hands stood on end, tickling until I had to resist the urge to scratch them. I forced my back straight and my shoulders square so the blight wouldn’t see my energy flagging, draining into the lightning.

With a shriek so high it hurt my ears, the blight yanked downwards, its tentacles tearing ceiling tiles free to smash to the floor. One tile, three, five. Then dozens. Fluorescent lights exploded, plunging the store into gloom. Tiles shattered around me and jellybeans scattered like marbles. By the glow of my lightning charge, I darted towards a service counter, diving under the counter hatch. Huddling in my leathers and helmet, I barely fit.

I stared at the rain of tile fragments as it slowed, and then stopped. Each was coated on one side with blight ichor, as if the entire ceiling cavity had been filled with the blight’s contamination.

This blight hadn’t destroyed the surface of the dream. It had rotted its very bones.

How can you fight your nightmares when they’re real?

Melaina, half-human dream therapist, just wants her life to return to normal. Yes, her Oneiroi father is in prison and, yes, the place she worked burned down, but she has a cute boyfriend and a new house. She beat the bad guy. She’s earned a break. Right?

Unfortunately for Melaina, people are still getting possessed by nightmare spirits; the police are investigating her past; and the bad guy’s brother, the Morpheus himself, is coming to town to demand answers. When a deranged ex-nurse checks himself out of hospital on the same day her cousin runs away from home, Melaina is dragged into a fight not just for her life but for her soul.

Add to your Goodreads ‘to read’ shelf today