← Review: ‘Fairytales for Wilde Girls’ by Allyse Near
A Christmas song and a warm, fuzzy hug →

Review: ‘The Name of the Wind’ by Patrick Rothfuss 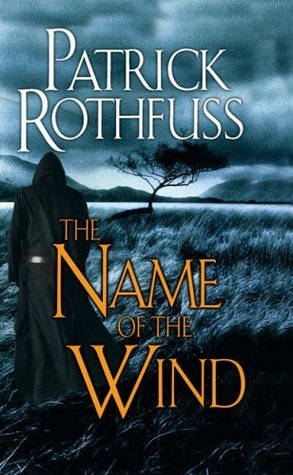 Told in Kvothe’s own voice, this is the tale of the magically gifted young man who grows to be the most notorious wizard his world has ever seen. The intimate narrative of his childhood in a troupe of traveling players, his years spent as a near-feral orphan in a crime-ridden city, his daringly brazen yet successful bid to enter a legendary school of magic, and his life as a fugitive after the murder of a king form a gripping coming-of-age story unrivaled in recent literature. A high-action story written with a poet’s hand, The Name of the Wind is a masterpiece that will transport readers into the body and mind of a wizard.

I used to read a lot of epic fantasy in my teens and 20s. Eventually I lost the endurance for it — for the sort of weighty tomes that give you a concussion if you fall asleep reading them in bed. Also, I discovered YA and urban fantasy (both of which don’t run that long, as a rule).

Just over a week ago, I was lamenting to friends that I had finished my current audiobook series (The Hollows by Kim Harrison). These friends are all book nerds who didn’t give up on epic fantasy, and all of them recommended Patrick Rothfuss.

It took me a chapter or two to get into The Name of the Wind. The whole “three silences” thing at the start threw me — although that sort of epic, bardlike introduction to a fantasy novel isn’t unusual, like I said, it’s been a while. Still, since I’d paid for the audiobook already I persisted, and it was so worth it.

The flashback-style mechanism of Kvothe telling his story to a scribe means that we get to jump between his detailing his childhood misadventures and the present. Because most of the story is the former, the latter serves as excellent foreshadowing of tragedy to come. Interestingly, the latter also contains foreshadowing for events that presumably happen later in the series, once the retelling is complete. (At least, that’s my read of things.) I admire the level of craft that has gone into that.

Kvothe himself is an interesting character, and by maybe halfway through the book I’d fallen a little bit in love with him (present Kvothe, not the 15-year-old whose tale comprises the bulk of the book, because That Would Be Wrong). He’s the kind of character that is brilliant but not Mary Stu-ish; he’s rather cocky and arrogant, and gets himself into all kinds of trouble.

But I think my favourite thing about him is that he sees the beauty in things. For example, I’d noticed that all the girls he met he described as beautiful, and at first I wondered if this was a sort of wish fulfilment thing on the part of the author — but then one of the other present-day characters pulled him up on one of his descriptions, pointing out the flaws in one girl’s appearance. That made it clear to me that Kvothe (at least young Kvothe) just had rose-coloured glasses on. I thought that was sweet. 🙂

The world-building is excellent, masterfully handled; the bulk of Kvothe’s story covers his time in the university, which means we get to learn the mechanics of magic as he does.

My biggest bugbear about this book is that Goodreads tells me this came out in 2007, and the one and only sequel came out in 2011. That means I’m going to be in the market for a new audiobook series very soon, because I doubt the third book will be out any time soon…

Maybe I’ll look for another epic fantasy audiobook after this. At least audiobooks have a much smaller risk of causing concussion.