Review: ‘Behind the Scenes’ by Dahlia Adler 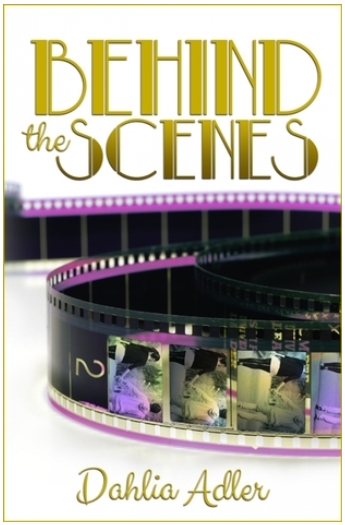 High school senior Ally Duncan’s best friend may be the Vanessa Park – star of TV’s hottest new teen drama – but Ally’s not interested in following in her BFF’s Hollywood footsteps. In fact, the only thing Ally’s ever really wanted is to go to Columbia and study abroad in Paris. But when her father’s mounting medical bills threaten to stop her dream in its tracks, Ally nabs a position as Van’s on-set assistant to get the cash she needs.

Spending the extra time with Van turns out to be fun, and getting to know her sexy co-star Liam is an added bonus. But when the actors’ publicist arranges for Van and Liam to “date” for the tabloids just after he and Ally share their first kiss, Ally will have to decide exactly what role she’s capable of playing in their world of make believe. If she can’t play by Hollywood’s rules, she may lose her best friend, her dream future, and her first shot at love.

I feel like I’ve been saying this a lot lately, but I don’t normally read contemporary fiction. I picked this one up because I “met” Dahlia via Twitter and then started following her blog, where she posts all sorts of interesting and informative posts for writers (plus a whole passel of book reviews and recommendations). I love her snark, humour and heart — all of which are things that come across in Behind the Scenes. In spades. Truckloads, even.

Unlike my other recent contemporary reads, though, this book isn’t one that tears your heart out and stomps it into the dirt. I kind of appreciated that — I wasn’t in the mood to be sobbing into my pillow when I read this BASICALLY IN A SINGLE DAY!

The thing that makes Behind the Scenes is definitely the characters. None of them are perfect, not even the gorgeous Hollywood actors. Especially not them. I don’t think there’s a single character that doesn’t make a stupid decision at one point or another, but those decisions didn’t make me feel like I was watching a car accident. Instead, I was so immersed in the story and the characters’ headspaces (especially Ally’s, as the POV character) that I was totally understanding and supportive of them in all their complexity. To the point where when Liam’s friend Josh has a go at Ally for something dumb she did, I was all, “WOAH, WHAT?!” right there along with her.

The friendship between Vanessa and Ally is complex and sweet; it could have very easily have been one-sided, especially given Ally ends up working as Van’s assistant and doing most of the “giving” in the relationship. But Vanessa only hired Ally because the latter needed a way to make money for college, and Ally refused to just take the money as charity or a loan. Plus Vanessa does what she can to help Ally out in other ways.

Also, let’s take a moment to appreciate that Vanessa is a Korean actress, not a blond bombshell. This wasn’t just tokenistic diversity either; one of the reasons Ally is so keen to help her friend’s career is that she’s been there for her with icecream and tissues every time Vanessa was rejected from a role for not being Caucasian enough. It’s one of the layers that form their relationship. The racism Vanessa faces from some quarters is by no means the central theme of the book — Dahlia doesn’t rub our noses in it or anything — but it’s there and feels real.

And then there’s Liam. Ah, Liam. He’s a little bit troubled without being a bad boy (unlike Josh, who is both of those things). He’s intelligent, witty, charming, and — as you are if you’re a Hollywood heartthrob — drop-dead gorgeous. All the talk of his blue eyes and defined abs were enough to make a girl drool. *fans self*

Another key relationship is the one between Ally and her family. It was nice to see a YA book where the family unit is present — for the most part, anyway, as her dad spends a lot of time in hospital being treated for cancer — and all look out for each other. Ally’s little sister Lucy is adorable (and actually, I just realised she may be the only character that dosen’t make a stupid decision — there was one after all). I just wanted to give her all the hugs.

This is a great, light YA read with huge dollops of romance and some of the funniest dialogue I’ve read in a long time. I was disappointed when I finished it. Five happy stars!

3 Comments on “Review: ‘Behind the Scenes’ by Dahlia Adler”