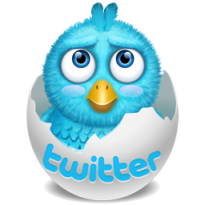 The days of authors being able to isolate themselves from their readers and concentrate on their craft are well and truly gone. There may be some fabulously rich bestsellers that don’t need to bother with social media, but they are few and far between. Even successful authors have a Facebook page, or Twitter, or a blog—or all of the above. (I know, because I follow some of them.) Apparently “word of mouth” is the newest craze in book marketing. That’s code for “the author maintains a social media presence”. It has the benefit of being cheaper than paid advertisements.

And it works too. I only discovered about Jacqueline Carey’s new urban fantasy, Dark Currents, via her Facebook page. I then went on to buy it—in hardcover, no less—and loved it. (And now I’m blogging about it. I should be on retainer!)

And if it’s important for them—the ones that have made it past the gauntlet of interns, agents, acquiring editors and whatever other publishing industry professionals exist (hey, I don’t know; I’ve never dealt with them!)—how much more important is it for self-published indie authors? And wannabes like me? Many agents say that if they are interested in a writer’s work, they will look them up on social media. I expect it’s mostly to determine whether the writer is crazy, arrogant or otherwise likely to be hard to work with, but part of it is also to see whether the author has a significant platform, like thousands of followers on Twitter or a crazy-popular blog.

All of these are reasons to engage with social media, whether you want to or not. But there are others.

I’ve been a Facebook person for years now: a personal profile only accessible to family and friends. I mostly post photos and cute updates about my son (as I was drafting this he asked me if I was king of our house; damn straight!). I haven’t actually created a public profile for my writing … mostly because it feels strange to create a regular Facebook account for it (one where I become Facebook friends with people), and to create a “fan” page when I have nothing for anyone to be a “fan” of feels like tempting fate.

But in November I decided to join Twitter. I’m sending my first book out to agents, and thought it was time I gave the social-media-as-writer thing a whirl. I had no idea what I was doing, but it’s easy to get the hang of. I’ve had non-Twitter friends ask me what I tweet about, and I tell them the truth: mostly I just chat to people. It’s not about posting the cleverest or most insightful thing (at least, not for me—I’m not that clever and am definitely not insightful!). It’s just about being friendly. Sometimes I’m funny but it’s usually by accident.

I got lucky, too—within a few weeks one of the people I was following tweeted about a contest called Pitchwars. Even better, I heard about it in time to actually enter. I chose three mentors to submit my query letter and the first few pages of my manuscript to, and sat back to wait. I also befriended other entrants and a few of the mentors; the competition had a super-supportive atmosphere that I found surprising, but also a huge relief. I don’t deal well with overly hostile alpha types.

I didn’t win, or even get picked for the final three by my mentors—although apparently I made some shortlists. It turned out that my query letter—which I’d already sent to a dozen or so agents by then—blew chunks. Several kinds, in new and interesting colours. Disheartening, much? I did get some lovely compliments back on my writing, though, as well as some specific and constructive feedback on the query and opening pages. The query in particular is, oh, a thousand times better now. If I ever meet the agents who got the original version, I plan to studiously avoid eye contact.

I also got invited to collaborate on a new blog (more on that next month)—which consequently encouraged me to start my own, personal blog (hi!). And I found myself a new beta reader for my book (the aforementioned Chynna-Blue). AND I’ve started following the tweets of a bunch of agents and agent interns, which is educational and occasionally alarming.

All this in less than two months.

So what’s my point?

I got onto Twitter with the misguided notion that it might be a good idea to build up some sort of following so that when I published my book (either traditionally or as an indie author) more people would know about it than my boyfriend and my mother. But I’ve found a brilliant, supportive community of writers who share opportunities, provide feedback and are a willing cheer squad. And many of them comment about the fact they’re writing, which I for one find an excellent motivator.

If you’re a writer trying to decide whether to bother with Twitter—if you can’t imagine what worth there could be in 140 characters—then DO IT! Be friendly and polite, and see how far it gets you.

Also, you never know. Maybe when that agent googles you they’ll like what they see.

Leave a Reply to Amber a Bardan Cancel reply