Today I’m taking part in the Aussie Owned and Read Haunting Halloween Hop. (Yes, it’s 31 October here already, Northern Hemisphere. Nyah nyah!) The basic idea is that you post about something that scares you. I’m kinda sorta double-dipping on this one, because last week I blogged at AOR about the opening scene in Isla’s Inheritance, and the scary seance that inspired it.

(Yes, I used to do seances for fun. I don’t anymore. I’d like to write a book about Emma, the girl who runs the seance for Isla and Dominic, and what mischief might befall her as a result. It’s on my to do list.)

ANYWAY, moving on. There are a couple of answers to the “what scares me” question. I’m actually choosing to write the slightly less scary one, because the more scary one (something happening to my child) is so paralysing that I can’t even. The slightly less scary one is still pretty scary, though, and it’s been a fear I’ve had since my high school social science classes, when they taught us about nuclear weapons and the silent killer that is radiation poisoning.

I hate the idea of the invisible, creeping thing — the nuclear poison, toxic gas or virus on a droplet in the air. Something so tiny that you can’t see it to run away; something that can kill you. Or turn you into a zombie. Years ago, I saw a movie in the cinema (Outbreak, maybe?) that had a scene where someone with a deadly virus didn’t know it yet. They went to the movies and sneezed, and then the camera tracked the little droplet of air over the crowd and infected others.

I nearly hid under my seat.

As I bet you can imagine, the current ebola outbreak has made me very nervous. Even though I know intellectually that ebola is not very contagious — rating below the common cold, measles and HIV for infectivity — there’s not a chance you could get me in a room with someone who had it, even if I was in one of those full-body bubble suit things.

Maybe one day I’ll write a book to exorcise these fears, get them on the page. Probably not, because I want to be able to sleep at night…!

To visit the other blogs in the hop (or to register your own post), click here. Or leave a comment. What’s the thing that scares you?

So today is my hativersary

Yes, you read that right. Hativersary. It’s the anniversary of my traumatic encounter with a hat.

Last year my boyfriend took me and my son (who was then two-and-a-half) on our very first overseas trip. The itinerary was Scotland, then Spain, then Italy. In Scotland we stayed at Duns Castle in the border region, an extravagance to celebrate the BF’s significant birthday. It was amazing. The atmosphere of the place was something I will never forget. Our room was one of the corner suites, in what used to be the guard tower, and even though I got the inevitable cold, I still really loved the place.

The other memories of Scotland that stay with me are the pubs—you don’t get pubs like that in Australia—and Edinburgh’s skyline at sunset. Oh, and the day we went to a falconry! I got to fly, and pat, a boobook owl, a species from Australia. He was a long way from home too.

My only regret was that we missed the snow by a day!

Then, after some frustrations including lost luggage for a party of five adults and two children, we got to Spain. 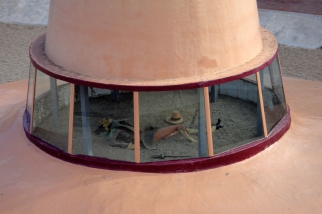 Gulliver’s Hat, from the outside.

In Valencia they have this awesome park based around Gulliver. You know, the fellow who got captured by the Lilliputians? Well, he’s a giant fiberglass man, reclining in the gravel, covered in slides and climbing frames and all sorts of other coolness. The BF and I were talking about how awesome it’d be to have something like that in Canberra, while we took photos of us standing inside his shoe, or of my son eyeing off a sword that was almost as wide across the pommel as he was tall.

Then we discovered why it’d never be feasible in Australia. They’d never get the public liability insurance.

See, Gulliver has a giant hat, and inside the giant hat is a little model of the entire park, like a 3D map. While the BF and my son were exploring another slide, I climbed onto the hat (the brim was a foot or so from the ground) to take a photo. After I was done, I distinctly remember looking down at the ground from the edge and thinking, “Nah, if I slip I’ll hurt myself; I’ll go use the stairs.”

And then, right beside the stairs, my foot slid off the edge and I fell. 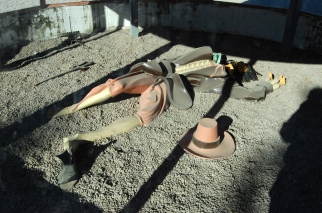 Inside Gulliver’s Hat. Acquiring this photo cost me a trip to Italy, so I hope you like it. :p

It twisted under me and rolled at an entirely unnatural angle. I’ve sprained my ankle before, but I’d felt nothing like this. By the time the BF ran over it had swollen up like I had a tennis ball instead of an ankle. He took off to get the first aid attendant—in hindsight, the fact they had a first aid office on site was a good warning sign—while I gave my son a cuddle, because he got quite hysterical to see me crying from pain. (And I suspect because all of a sudden the sliding had stopped. Hey, he was two!)

So that day I got to experience a few other new things I hadn’t before. I got to ride in a Spanish ambulance, and experience a crowded ED waiting room where no one (and I mean NO ONE) spoke English. I’ve never felt so helpless in my life. Fortunately after I got wheeled off on a stretcher, the BF got hold of the Australian consulate, and they were able to talk to the hospital staff and organise everything. They were, to hear him tell it, pretty amazing.

Your tax dollars at work.

Unfortunately I did enough damage to my ankle that I ended up in a cast and on crutches. Which meant that Italy was cancelled (yes, the whole country!) and we all came home, because there was no way my BF could manage me, a two-year-old, three suitcases and various carryon luggage on his own. After we got home I had to get physiotherapy for my ankle.

I am still sad that I missed seeing Rome and Pompeii, in particular, but hey. I’m the only person I know that ruined an overseas holiday by falling off a hat, and that’s worth something … right?

The most terrifying thing a writer will see…

Big call, I know. But I reckon most writers will agree with me. This is the most terrifying thing you will ever confront:

Warning: this picture may shock you!