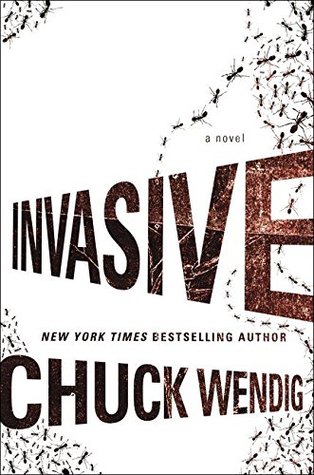 Hannah Stander is a consultant for the FBI—a futurist who helps the Agency with cases that feature demonstrations of bleeding-edge technology. It’s her job to help them identify unforeseen threats: hackers, AIs, genetic modification, anything that in the wrong hands could harm the homeland.

Hannah is in an airport, waiting to board a flight home to see her family, when she receives a call from Agent Hollis Copper. “I’ve got a cabin full of over a thousand dead bodies,” he tells her. Whether those bodies are all human, he doesn’t say.

What Hannah finds is a horrifying murder that points to the impossible—someone weaponizing the natural world in a most unnatural way. Discovering who—and why—will take her on a terrifying chase from the Arizona deserts to the secret island laboratory of a billionaire inventor/philanthropist. Hannah knows there are a million ways the world can end, but she just might be facing one she could never have predicted—a new threat both ancient and cutting-edge that could wipe humanity off the earth.

I read (ok, listened to the audiobook of) Invasive just after finishing Zer0es, because I wanted more. Not necessarily more of the hackers from the first story, but more of that weird parallel Earth with its almost sci-fi tech and its Hollywood-esque storytelling.

It’s fortunate that I didn’t go into Invasive expecting it to be about the hackers from the first book, because it wasn’t (although Wade does get a brief cameo, and Agent Hollis is a secondary character). It was closer to single POV — the main character is Hannah, and although we get chapters from other characters, they are interludes rather than whole chunks of the story.

I loved Hannah. She’s a futurist who gets anxiety attacks about the direction humanity is heading in, the child of doomsday preppers who absorbed what they taught her but didn’t subscribe to their beliefs about the futility of trying to improve the world (except maybe in her nightmares). She’s good with people, good with tech … but not so perfect as to be super-human and unbelievable.

Did I mention that I love her?

Like Zer0es, Invasive is fast-paced. Unlike Zer0es, it has a lot more gore. If this were a movie, it’d have an MA15+ rating (an R rating in the States) for the gore alone. The blurb mentions weaponising the natural world, and one look at the cover will tell you which part of the natural world. Let’s just say that I wasn’t scared of ants before I read this book, but … well, I won’t be walking past a trail of them any time soon. Urk.

Still, I actually think this is a better book than Zer0es (which I loved). Having less POV characters gives it more focus, makes you more invested in the action, because a lot more is riding on Hannah’s perspective and efforts. In an ensemble cast book like Zer0es, the characters feel more … disposable, almost?