Review: ‘Nevermoor: The Trials of Morrigan Crow’ by Jessica Townsend 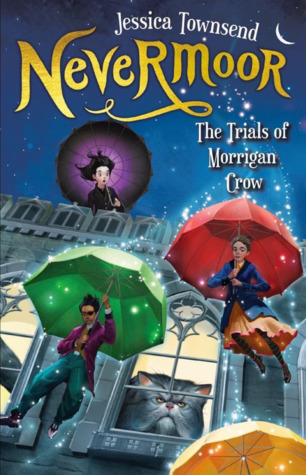 Morrigan Crow is cursed. Having been born on Eventide, the unluckiest day for any child to be born, she’s blamed for all local misfortunes, from hailstorms to heart attacks–and, worst of all, the curse means that Morrigan is doomed to die at midnight on her eleventh birthday.

But as Morrigan awaits her fate, a strange and remarkable man named Jupiter North appears. Chased by black-smoke hounds and shadowy hunters on horseback, he whisks her away into the safety of a secret, magical city called Nevermoor.

It’s then that Morrigan discovers Jupiter has chosen her to contend for a place in the city’s most prestigious organization: the Wundrous Society. In order to join, she must compete in four difficult and dangerous trials against hundreds of other children, each boasting an extraordinary talent that sets them apart–an extraordinary talent that Morrigan insists she does not have. To stay in the safety of Nevermoor for good, Morrigan will need to find a way to pass the tests — or she’ll have to leave the city to confront her deadly fate.

A bookseller told me that Nevermoor was being touted as the new Harry Potter. But publishers have been making that claim for years, trying to tap into JK Rowling’s huge success, so I was a little scepitcal. Still, I’d already bought the book by that point (I am a book hording dragon, okay?), so I decided to give it a go anyway. And … I can see why they made the comparison.

This review might be a little gushy. Try to bear with me!

Morrigan has a couple of things in common with Harry in the first book of that series. Both are eleven, and both come from mundane families that intensely dislike them. However, Nevermoor isn’t set on Earth or any parallel thereof but in a fantasy world which has the states of the Republic and the more magical Free States. The former are still kind of magical — they use an energy called Wunder in a manner similar to electricity, but dragons are real and children born on Eventide are seen as cursed, causing all manner of disaster to befall those around them. The Free States are truly, spectacularly magical, though, and make the Republic (or at least those parts of it that we see) seem drab by comparison. They are quirky and fun, and I loved them.

Jupiter chooses Morrigan to be his first ever candidate for the Wundrous Society. He is an adorable, bizarre character who makes Dumbledore seem staid, but both men share the ability to dissemble, never answering straight questions. This is to Morrigan’s intense frustration, because she knows she can’t get into the Wundrous Society without a knack, and Jupiter, while assuring her all will be fine, refuses to answer questions about it.

I really enjoyed Morrigan. She’s bright and determined and just wants to find a true home and friends (and not be deported and face her fated death). She also dresses all in black (well, you would if your name was Morrigan Crow, wouldn’t you?) and is scared of the idea of acid-spitting land dolphins. What’s not to love? My other favourite characters were Jupiter and Fenestra, the giant talking cat who works at the hotel where Jupiter and Morrigan live. Fen is snarky and a little callous, but ultimately comes to regard Morrigan the way a mother cat might her kitten.

One interesting element of the book is the way that Morrigan — who entered the Free States illegally, without the appropriate immigration paperwork — is treated by the border police. One of them in particular is an a-grade bigot who regards illegal immigrants as less than human. There’s an opportunity for parents to discuss the concept of refugees with their kids after reading this book.

Nevermoor fits into the middle grade category rather than young adult. There are a few scary scenes, but nothing graphic, and no sexual content or bad language that might deter some parents from buying this for their kids. Or for themselves. I won’t judge!

After all, I’m super-keen to snap up the sequel myself. 😉 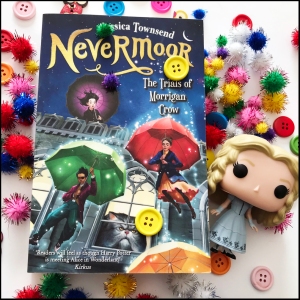 2 Comments on “Review: ‘Nevermoor: The Trials of Morrigan Crow’ by Jessica Townsend”