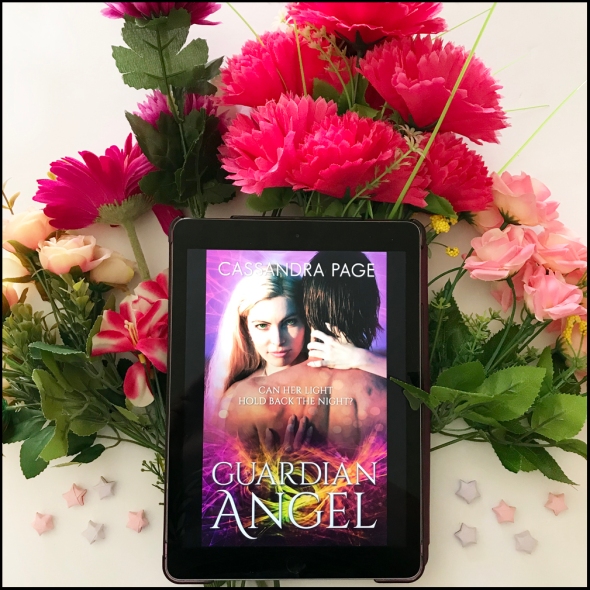 It’s less than a week till Guardian Angel hits the e-shelves (shush, that’s totally a thing) — 28 April is the big day, and I’m not at all nervous, ahahahaha. D: Seriously, releasing a book, even a novella, is always nerve-racking. But I am proud of this little story, and I hope you will enjoy reading it as much as I did writing it.

All the pre-order links are live, so you can buy Future You a present. And as Guardian Angel is a bargain at US$0.99 (around AU$1.30), Future You will be super-impressed at your frugality!

If that price doesn’t convince you, you can find an excerpt below. Enjoy.

Can her light hold back the night?

There are two things actor Jordan Woodrow always swore were true: that there was no such thing as love at first sight, and that he could never love a fangirl. But after he met Brianna at a convention, everything changed.

Now, hallucinations creep at the edge of his days and nightmares scuttle through his sleep, and only Brianna can keep them at bay. When she is with him, everything is fine. No, it’s better than fine—it’s perfect.

Why can’t his family and friends see that?

He knew it was a dream, because he was on the set of Beyond Deathgate, and he knew, even dreaming, that he’d finished filming that movie three years ago. It had already premiered, and it had been a hit. They were negotiating the sequel.

But knowing that didn’t change the dream.

He was back in the spideresque cavern, but he was in his pyjamas, not Aldron’s trademark blue leather armour. There were no film crews hovering around the edges of the room, no cameras on tracks or scurrying assistants carrying messages or coffee. The domed ceiling was full of heavy cobwebs and shadowed darkness, not a lighting rig.

He turned around to look behind him … or tried to. He couldn’t move. A thick, sticky web was wrapped around him, cocooning him, its strands gleaming sullenly in the uncertain light. He looked down at himself; his hands were crossed over his chest, like the corpse at a funeral, and bound as tightly as if he wore a straitjacket. His feet were bare in the thick detritus on the floor of the cavern. The frail skeletons of small animals looked up at him with accusingly empty eye-sockets from amid the decomposing leaf matter.

Something squirmed against his toes.

Oh, god! Jordan made a small, panicked sound in the back of his throat. He tried to lift his feet, but he couldn’t—the web didn’t have enough give in it for him to bend his knees. His pulse thundered in his ears. What the—?

That was when he smelled it.

His brain struggled to find a word for the foul reek that drifted through the tunnels. Struggled and failed. Maggot-infested meat rotting in the sun? The stench of untreated sewerage? It was both those things, and more. His eyes watered with the acrid stink of it, and he thrashed against the web that bound him. He knew what was coming. The spideresque: half human, half spider, all black malevolence and aching hunger. She was going to scuttle into the cavern, and she was going to devour him. And this time he had no Ring of Emrys to save him.

The huge, bloated shape of the spideresque appeared, silhouetted against the roughened stone of the far wall. Her stench washed over him, stronger now. He coughed, retched. It’s a dream, he told himself. It has to be. But that initial certainty seemed far away now. A second thought came, barely a whisper: I’m going to die. Despair flooded him, weighing down his limbs and settling like a rock on his chest. What’s the point in fighting?

There was no point. He hung in the web, a fly ready to be eaten.

Jordan lifted his head, relieved at the sound of that familiar, beloved voice. Brianna stood before him, facing the beast. She was dressed in lambent white, a vision of Emrys herself; her hair glowed with its own golden light, casting soft shadows across the webs that ensnared him. She held one hand before her, palm outward toward the spideresque. “Get back,” she yelled again. Her light grew brighter—so bright his eyes began to water. “Leave him alone!”

The monster shrieked, rattling its forelegs together. Dust rained down from the ceiling with the force of its cry, and it paced back and forward—but it drew no closer. Finally, unable to face the purity of her light, it retreated into the shadows with a final, protesting wail. The reek of its body faded.

Brianna turned to him, her brilliant emerald eyes wide, and reached out to touch the webs. They disappeared, and he collapsed into her arms.

At her words, they were transported onto a field of grass whose blades were so soft they were like feathers beneath him. Flowers bobbed in the breeze, yellow and perfect. The trees whispered at the edge of the field, and the sky was a brilliant, aching blue.

Brianna cradled him against her chest like a baby as he wept with relief. “It’s okay,” she murmured, “I’ll protect you. Don’t you worry. Your guardian angel is here.”

One Comment on “‘Guardian Angel’ excerpt and pre-order links”