← ‘A Hand of Knaves’ anthology — a quick announcement
Review: ‘Carry On’ by Rainbow Rowell → 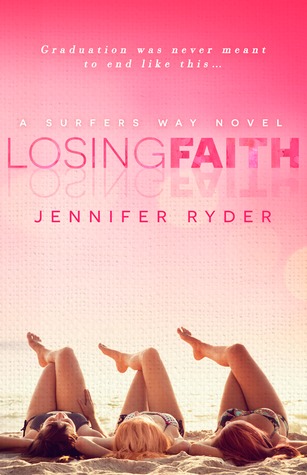 The inseparable are well and truly split.

Mack, Faith and Lacey, joined at the hip since primary school, are about to graduate high school. You might think this sounds like a book about coming-of-age and taking that leap into adulthood.

It is — except one of them doesn’t make it …

Lacey Marone had two solid things on her agenda for her future — working in the Pepperoni Palace until she figured out what the hell to do with her life, and getting together with her bestie’s older brother, Quade, who she’s crushed on since she was a kid.

Then graduation night changed everything. Almost three years later, Lacey won’t rest until she discovers the truth surrounding Faith’s death. She’s outcast by those who want to move on from the tragedy, as if the town’s sweetheart never existed.

Years after losing Faith, Quade Kelly returns home to Runaway Beach, determined to mend ties with his parents and cement a future in his hometown teaching at the local primary school. Quade soon learns that his sister’s ghost lives on, thanks to Lacey, the girl who still owns a piece of his heart.

Lacey is hung up on her quest for answers. Quade wants to bury his failures of the past. The pull between them can’t be denied but can the past be forgotten?

Truths will be uncovered and hearts will be cracked open wide. After all, graduation was never meant to end like this.

Losing Faith is one of a pair of companion novels; the other is Seeking Faith by Lauren K. McKellar, which follows Mack’s story. I am a huge fan of McKellar’s work, so I bought the pair and — on advance — read Losing Faith first. (You really seem to be able to read them in either order, but Losing Faith really whets your appetite for wondering what on earth Mack’s deal is!)

If I had to describe this book in one sentence it would be “love after tragedy in a sleepy coastal town”. I think I went into it expecting it to be a little bit more of a murder mystery than it was — Lacey is obsessed with finding the person responsible for Faith’s death in a hit-and-run accident, and with preventing something similar happening to anyone else. But her investigation doesn’t really have any sort of momentum within the book (understandably, as it’s three years later and any leads have petered out). It’s only when the clues are shoved under her nose that she puts everything together, well after I suspect most reads would have.

The romance between Lacey and Quade develops fairly quickly, but it doesn’t feel like insta-love because they have a long history of wanting to hook up from earlier in their relationship. The sex scenes are plentiful and also steamy (so be warned if that’s not your thing — though they get a big thumbs up from me). There is also a fair dose of the sort of humour you get in real life: foot cramps and mosquitoes and interrupting phone calls. I liked that realistic element, and that the book didn’t take itself too seriously.

The reason I’ve given Losing Faith 3.5 stars rather than a higher rating is that, for some reason, I didn’t connect with this story and its emotions as much as I wanted to or probably should have. I spent a couple of days after I finished it trying to figure out why, and I can’t put my finger on any one thing. The writing is good and Lacey is an enjoyable character to follow. I don’t normally read pure romance (McKellar’s work notwithstanding), so this might be an “it’s not you, it’s me” thing.

Still, 3.5 is a solid “I liked it”, and if you love romance by the beach and a hint of mystery, then this is definitely one for you to check out.