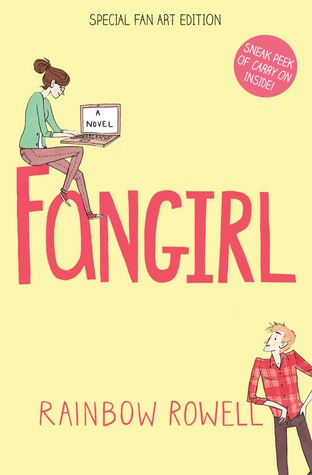 Cath and Wren are identical twins, and until recently they did absolutely everything together. Now they’re off to university and Wren’s decided she doesn’t want to be one half of a pair any more — she wants to dance, meet boys, go to parties and let loose. It’s not so easy for Cath. She’s horribly shy and has always buried herself in the fan fiction she writes, where she always knows exactly what to say and can write a romance far more intense than anything she’s experienced in real life.

Without Wren, Cath is completely on her own and totally outside her comfort zone. She’s got a surly room-mate with a charming, always-around boyfriend, a fiction-writing professor who thinks fan fiction is the end of the civilized world, a handsome classmate who only wants to talk about words . . . And she can’t stop worrying about her dad, who’s loving and fragile and has never really been alone.

Now Cath has to decide whether she’s ready to open her heart to new people and new experiences, and she’s realizing that there’s more to learn about love than she ever thought possible.

I read my first Rainbow Rowell novel last year: Eleanor & Park is exceptionally well written, albeit darker than I was expecting. Maybe I was subconsciously misled by the fact the author’s first name was “Rainbow”? :p

Still, when I heard Rowell had written a novel about a girl obsessed with fan fiction (aka fanfic) about a series of books inspired by Harry Potter, I was definitely keen. Those are two brands of geeky subculture that I’m familiar with; I experimented with fanfic when I was in my 20s (although when I say it like that it makes fanfic sound like illegal drugs or something!) — and Harry Potter … well, duh! I haven’t been living under a bush.

Fangirl blew me away. I’ve really fallen in love with the subgenre of YA that is geeky contemporary over the past few years, and this book is another addition to that shelf. Rowell’s writing shines here, both in the day-to-day tale of Cath’s life and in the extensive excerpts of her fanfic. I was just as hooked by her take on her Simon/Baz fic as I was by her main storyline. Happily, Carry On, the fanfic story that Cath works on throughout Fangirl, is also now available as a novel — a fact so meta that it makes me grin. I’ll definitely be buying it as soon as I can.

As for Cath, it’s hard not to love her. She struggles with anxiety, which is made worse by her twin, Wren, effectively abandoning her as soon as they hit university. Her father is bipolar so Cath spends a lot of time worrying about him — and Wren has her own issues, which she seeks to forget about through her new party lifestyle. At times, as much as I understood what she was going through, I wanted to shake Wren till her teeth rattled; she has moments where she is particularly mean-spirited. The times that Cath stood up to her were some of my favourite parts of the book.

There is a romance here, though it’s hard not to name names without spoilers. There are a couple of different males on the scene, but this isn’t a love triangle in the traditional sense. One of the guys turns out to be a selfish a-hole and the other is a sweetheart. There’s no competition. And that’s all I will say about that.

As far as other characters go, I adored Reagan, Cath’s roommate. Despite how prickly she is, she takes Cath under her wing in a “tough love” way that it’s hard not to love. Also, Professor Piper receives a notable mention — she’s the sort of supportive writing lecturer I wish I’d had when I was at university. (And I love the way Rowell handled the storyline as it related to Cath and Wren’s mother. So realistic!)

Fangirl is a story about stories, about getting out of your comfort zone, and about finding out who you are. I love it. 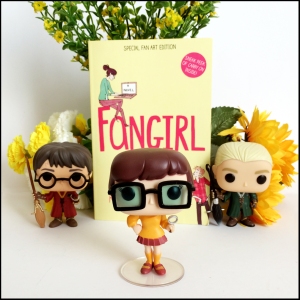 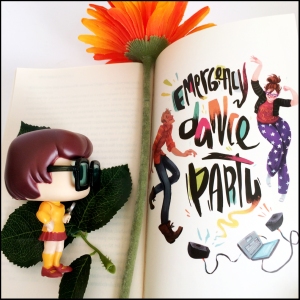