← Review: ‘The Firebird’ by Sophie Masson
Review: ‘Heart of Brass’ by Felicity Banks →

Moving to a space station at the edge of the galaxy was always going to be the death of Hanna’s social life. Nobody said it might actually get her killed.

The sci-fi saga that began with the breakout bestseller Illuminae continues on board the Jump Station Heimdall, where two new characters will confront the next wave of the BeiTech assault.

Hanna is the station captain’s pampered daughter; Nik the reluctant member of a notorious crime family. But while the pair are struggling with the realities of life aboard the galaxy’s most boring space station, little do they know that Kady Grant and the Hypatia are headed right toward Heimdall, carrying news of the Kerenza invasion.

When an elite BeiTech strike team invades the station, Hanna and Nik are thrown together to defend their home. But alien predators are picking off the station residents one by one, and a malfunction in the station’s wormhole means the space-time continuum might be ripped in two before dinner. Soon Hanna and Nik aren’t just fighting for their own survival; the fate of everyone on the Hypatia—and possibly the known universe—is in their hands.

But relax. They’ve totally got this. They hope.

Gemina is over 600 pages. I devoured it in two sessions, despite being a single mother who works full time. That should demonstrate that you should read it.

Okay, you want more? Well, first off, know that this is the sequel to the magnificent Illuminae, which was one of my favourite 2015 reads — if not my favourite. I gave it five stars on a one to five scale.

The genre is, broadly, a young adult, fast-paced, alternate-format sci-fi series. The key adjective there is “alternate format” — both books are presented in a “found footage” way: instant message and radio transcripts, emails and security camera footage (transcribed by a character known only by his analyst code, and also — in this book — by my favourite crazy-ass computer). There’s another difference in Gemina, in that Hanna, our leading lady, has a journal and is an artist. This means we get character sketches, a rough map of the space station, and a creeping sense of dread at the bloodstain slowly spreading in each new page we see.

If Illuminae is space zombies meets 2001: A Space Odyssey, Gemina is a mash-up of space terrorists and space, um, aliens. Like, aliens from the movie Aliens. (This isn’t a spoiler if you’ve read the blurb, btw.) While the latter combination is definitely creepy, Illuminae gave me more chills — although that has a lot to do with my near-phobia of invisible killers such as plagues, I suspect.

I’d find it hard to choose between the leading ladies of Illuminae and Gemina — both are kick-butt in their own ways, though Hanna is in the literal sense that she’s a black-belt with military training, courtesy of ol’ Dad. Definitely a handy lady to have on your side in a terrorist-alien situation.

As for the blokes, I was fond of Ezra but would pick Nik any day of of the week. (Sorry, Ezra.)

We do get to see a handful of characters from the previous book — those that survived, at any rate. There’s a third book to come in the series, where hopefully Kady and Hanna (and the others, I guess, but mainly Kady and Hanna!) will team up and kick BeiTech face first through a black hole. I’ll be cheering for them from over here!

I hear the audiobook is amazing, but I read the paperback. Whichever way you do it, get this series. Love it. Name your children after it. 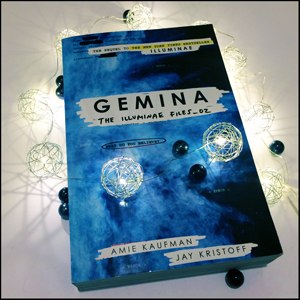 2 Comments on “Review: ‘Gemina’ by Amie Kaufman and Jay Kristoff”