Audiobooks, colouring and being an adult 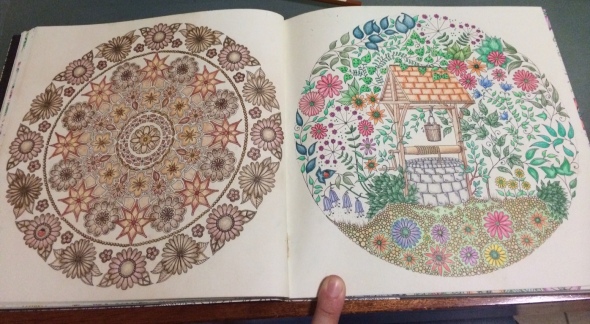 Since I joined Audible in June last year (they lured me in with a month’s free trial), I’ve become a bit of an audiobook addict. Usually I read my paperbacks in bed, and these days I’m generally so tired when I hit the sack that I barely manage to read a chapter before I fall asleep. Audiobooks, on the other hand, give me something to listen to in the car other than music and the news. I’d also listen to them while preparing dinner, folding the washing, that sort of thing.

More recently, I bought myself one of those newfangled adult colouring books and a set of coloured pencils. Now my new favourite form of relaxation is to sit at the dining table, surrounded by pencils and shavings, and scribble away while listening to the doings of whatever characters I’m shipping at the time.

It is basically the best thing ever.

When I first heard that adult colouring books were a thing, I was a bit bemused by the idea. (Trivia: there are also “adult” colouring books, if you know what I mean. *wink wink, nudge nudge* I don’t have any of those, but apparently Amazon does if you’re curious.) One of my friends expressed an interest in them, so after the Aussie Owned and Read post on them, I ordered a couple for her birthday — and then in the meantime she went out and bought herself one of the same ones. So I kept the double-up, which is Secret Garden by Johanna Basford.

Colouring in is a great, meditative way to keep my hands busy while my mind is off on a fantastical adventure. (Or listening to a memoir.) It’s more fun than folding the washing, and more satisfying than driving the car.

Don’t colour while driving, though. #protip

“Faye” – a photomanipulation by yours truly

I’ve experimented with various forms of art over the years – I did art in high school, but never really excelled. I’ve also experimented with digital art (photomanipulations), which is something I’m better at, but not brilliant at. Writing is the art-form I’m best at, probably because it requires less hand-eye coordination — though there’s always something new to learn there too (thankfully, or wouldn’t it be boring?).

Still, even though I’m still a bit of an amateur, it’s such a delight to be able to look back through the colouring book — I decided to do the pictures in order — and see how much my shading in particular has improved. It’s also funny to see the way I associate particular images with different books. 🙂

Colouring and audiobooks: I highly recommend it.