← The colour of happiness: emotions as colours in the Isla’s Inheritance trilogy
A week to go: ‘Isla’s Oath’ teaser → 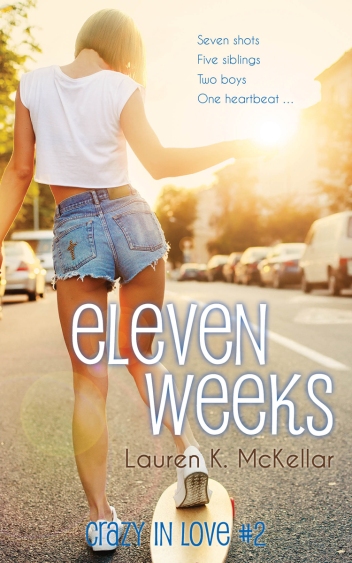 Stacey is good at pretending.

She pretends that the boy she’s in love with doesn’t exist.

She pretends that she’s happy to live and die in this small town.

She pretends that her life is carefree while her best friend’s world crumbles before her very eyes.

But Stacey’s got a secret …

And it’s going to ruin everything.

Note: Eleven Weeks comes out on 28 January. I was fortunate enough to get an ARC.

Stacey always came across as a caring friend but also as a girl who likes to party. She was a cheerleader in high school and not particularly academically inclined. It’s not that she’s stupid, just that she found boys far more interesting than homework — the sort of character that in your stereotypical teen movie would be the mean girl. Except Stacey’s not the mean girl; she’s lovely, and totally supportive of Kate throughout her struggle with her father’s Huntington’s diagnosis (and her wait to find out whether she has it too).

When you find out what was going on during that same period of time — the things that Stacey is dealing with on her own, because she doesn’t want to burden her friend — you realise that Stacey is selfless almost to the point of self-destruction. There were times I wanted to just shake her and say tell your friend, but of course I knew she wouldn’t, because otherwise we’d have known about it in the first book. 😉 I imagine that in the third book, when Kate finds out what Stacey was hiding from her, she’s going to kill her.

As far as what Stacey’s big secret is, I won’t spill it here, but I think you can guess it pretty easily from the blurb. One thing that is misleading in the blurb is the bit about “two boys” — it makes it sound like there’s a love triangle in Eleven Weeks, which I’m happy to report there isn’t. There’s just Michael, the friend who clearly likes her but that Stacey thinks is too good for her. Michael is adorable.

I felt so bad for Stacey, despite her frustratingly stubborn determination to keep her secret for as long as possible. It becomes clear pretty quickly that, even though she was popular in school, she has almost no sense of self-worth. It’s the cause of her continued rejection of Michael, and of her lack of ambition. The way her family constantly runs her down, doing everything but describing her as a dumb blonde to her face, is simply awful. I wanted to beat her mother and sister around the head with a blunt object at several points.

Some people shouldn’t be allowed to have kids.

Stacey is also quite naïve about certain things, but no more so than any other teenage girl in the same boat as her. Still, she tried her best to handle everything (once she got over the initial shock and denial).

Eleven Weeks has its teary moments, but I didn’t find it quite as soul-shattering as The Problem With Crazy, which broke me over and over. I’m really looking forward to the next book in the series, mostly because I really want to see Kate end up with Lee, and for everyone to live happily ever after! (Although given Lauren has form for breaking hearts, I’m a little nervous about that…)