I’m big on making lists at the moment (I’m writing this straight after scheduling a Top Ten Tuesday post), and after reading Chuck Wendig’s excellent post in the wake of the Santa Barbara shooting, I got to thinking about how, as well as being an excellent writer he seems to be a stand up bloke, and how I’d like to buy him a beer or something.

I don’t drink beer, but I can buy it for others.

So, in that vein, here’s my list of the five authors I’d have for dinner. As in invite over to my house, not eat. Or — more likely — take out to dinner at a nice restaurant somewhere, because I can’t cook that well and I wouldn’t want to shame myself. Or poison anyone.

I’m restricting myself to authors I’m not friends with, because otherwise this would be a much longer list. But probably a much wilder party! (Stacey, Lauren, I’m looking at you! 😉 )

Chuck Wendig. For the above reasons, and also because he’s funny. I like a man that can make me laugh and impart excellent writing advice at the same time.

J. K. Rowling. Because the world of Harry Potter is so clever and complex, and I’d love to engage with someone who can achieve such an epic level of world-building. Also because she was a single mother when she wrote it, and we could bond over that. Right? Right?

Stephen King. I’d probably be too terrified to talk to him, because — whatever you think of genre fiction in general and horror specifically — this man is a writing genius. (For the record, I love it but am now scared of clowns. Seriously.) But maybe I could bask in his reflected glory. If I did speak, I’d have to be careful not to utter any adverbs.

Delilah S. Dawson. As well as writing kick-ass steampunk fantasy romance, Delilah is funny and a geek. She’s such a geek she writes geekrotica, WHICH IS TOTALLY HOT YES I MAY HAVE READ IT SHUT UP! (The safe word is “wookiee”.)

Anne McCaffrey. Anne is my first writing love. We could have bubbly pie for dessert. Unfortunately, unless I get a TARDIS to organise this shindig, Anne is no longer available. 😦

I’d also like to add Richard Castle, but apparently he’s not real. *huffs*

Who would you invite to your very own author dinner? 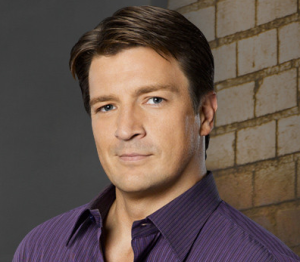 He looks pretty real to me.