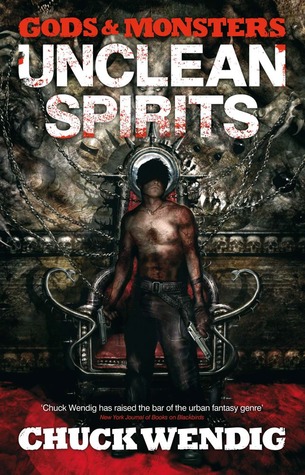 Five years ago, it all went wrong for Cason Cole. He lost his wife and son, lost everything, and was bound into service to a man who chews up human lives and spits them out, a predator who holds nothing dear and respects no law. Now, as the man he both loves and hates lies dying at his feet, the sounds of the explosion still ringing in his ears, Cason is finally free.

The gods and goddesses are real. A polytheistic pantheon—a tangle of divine hierarchies—once kept the world at an arm’s length, warring with one another for mankind’s belief and devotion. It was a grim and bloody balance, but a balance just the same. When one god triumphed, driving all other gods out of Heaven, it was back to the bad old days: cults and sycophants, and the terrible retribution the gods visit on those who spite them.

Anyone who’s read my blog before will know that I’m a fan of Chuck Wendig’s blog, where he dispenses writing advice spiced with profanity and humour. As Chuck’s publishers no doubt hoped I would, I’ve since gone on to read several of his books. Much like his blog, his books — including this one — are peppered with profanity and humour. (I had a genuine laugh at loud moment at one of the lines from Coyote’s perspective in Unclean Spirits.) There’s also violence. Gritty, gory violence, albeit beautifully described. So if that’s not your thing, like the other Wendig books I’ve read, this isn’t the book for you.

However, if it is, and if you like a fast-paced read with a main character you can cheer for as he bulldozes and bashes his way through the obstacles between himself and the path back to his wife and son, you’ll enjoy Unclean Spirits. The premise is somewhat similar to Gaiman’s American Gods (although, as we’ve previously established, I haven’t read it): gods and mythical monsters wander the Earth, exiled from their various heavens and hells 50 years ago. Powers diminished, they are still powerful, manipulative and dangerous.

And, for reasons that become clear as the story progresses, they seem to be distressingly interested in Cason Cole.

The plot is fast-paced, the characters interesting even when they aren’t always sympathetic. The perspective isn’t just limited to Cason’s; we also see bits of the story through the eyes of his wife, Alison, and various gods — from the aforementioned Coyote to Aphrodite, Psyche and other big names I won’t mention here, because spoilers.

The ending was a little abrupt; given Cason’s entire goal was to be reuinited with his wife and son, it might have been nice to see that on the page rather than implied. Maybe there’s going to be a sequel to mess it all up for the poor family, though.