← Collaboration, not competition
On how you write and how you live →

I’ve been slowly accumulating followers on Twitter, a few a day. And, unless the person breaks some of those rules I’ve blogged about previously, I tend to follow them back. Since November 2012 when I joined, I’d crossed over 500 followers and follows as at a few days ago. Not bad given I haven’t been pursuing followers aggressively like some people do.

Then Carissa added me to a list called Authors (with the description “authors of pure awesome”—thanks for that validation!).

For those of you that don’t know, Twitter lets you build lists where you can add people and then view their tweets as a single stream, filtering out stuff that isn’t relevant to your list theme. And you don’t have to follow them either (which can be a handy way to keep your number of follows down if you’re in Twitter ratio territory).

For example, I have a list for Agents and a list for Publishers. I follow the agents but not the publishers … and if I get to the Twitter ratio threshold of 2000 I’ll probably stop following the agents, knowing I can keep track of them via my list.

Anyway, out of curiosity, I decided to check out who was on Carissa’s author list. And though I have a writer list of my own with over 400 members, her list also had 400 members, most of which I didn’t follow.

I follows the bulk of them. In the last twenty-four hours, 77 of them have followed me back. I don’t expect they all will—I don’t automatically follow those that follow me, so why should they? I certainly won’t take it personally.

Another thing about lists: if you’re a writer (or anyone else) trying to build a social media platform to help tell the world about your book, then Twitter is partly a numbers game. I’ve read that you need to have thousands of followers before you can hope an agent or publisher will take your Twitter efforts seriously.

So if that’s your goal, but you’re wondering how on earth you keep track of your favourite tweeps when you’re following hundreds or thousands of people, lists are the solution. Set one up; call it “my faves” or “the bestest tweeps of all” or “the Avengers”—whatever you like. Then make it a private list, so only you can see it. That way everyone else doesn’t wonder why they didn’t make the cut. 😉

Not that I would do that. *shifty eyes* 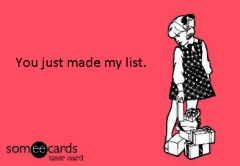