Disney girls, aka “Meg’s the best; forget the rest”…

My son has recently been watching old Disney movies. The most recent one on the repeat cycle has been the 1997 movie Hercules. He loves it because Hercules is really strong and beats up monsters, something a little boy who’s afraid of the dark can fully appreciate.

I like it, though, because it’s the only Disney “princess” movie where the leading lady isn’t a sweet little princess. In fact, I doubt she’s actually a princess, although they never reveal anything about her family origins.

I realised, watching it, that Meg was my ideal novel protagonist as well. She’s sassy and self-sufficient, not innocent and naive (and probably not a virgin, although this is Disney so that’s suggested rather than stated outright). She does her damnedest to take charge and get herself out of problems, although that sometimes gets her straight into them. Which is called life, really—we all do it. 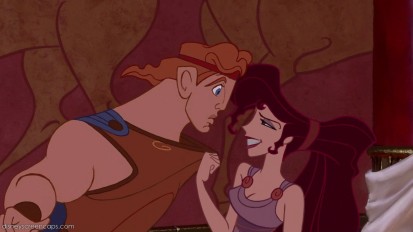 The image copyright belongs to Disney

When you compare her to the other Disney girls, she’s streets ahead. Some of them aren’t too offensive as female role-models (Jasmine is ok; at least she’s trying to have some independence, even if it’s not working); others make me deeply uneasy (Belle, although I love her bookish habits, basically teaches girls that if you love a man enough he’ll be “cured” of his abusive tendencies; Cinderella teaches girls the only way out of a shitty home situation is through marriage).

My characters come with varying levels of sass, but so far I haven’t had a wet noodle for a main character, and I don’t intend to start.

Here are a few choice quotes from Meg:

Meg: “I’m a big tough girl. I tie my own sandals and everything.”

Hercules: “You know, when I was a kid, I would have given anything to be exactly like everybody else.”
Meg: “You wanted to be petty and dishonest?”

Who’s your favourite kids movie leading lady and why?