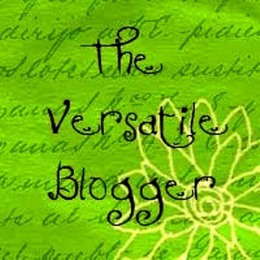 Many thanks to Debbie Vega, who nominated me for the Versatile Blogger award. I’m physically restraining myself from putting quotation marks around the word award in the previous sentence, though, because I didn’t get a medal to hangon the wall or anything. That being said, I always love a good blog hop. So here are the rules:

Thank the person who gave you this award. — Done!

Include a link to their blog. — Done!

Finally, tell the person who nominated you 7 things about yourself. — See below.

Ok, so here are my fifteen nominations. Wait, fifteen?! No, I’m doing seven, because it has a nice parallel with the number of things about me. And because I’m drafting this at night after a long day, and I’m falling asleep! If, however, you read this and think, hey, I’d like to do that blog hop but she didn’t tag me, let me know in the comments and I’ll add you in. Because eight is a good number too. When I was a kid it was my favourite. Now my favourite is thirteen, because I’m contrary.

Ahem. Anyway. I’m nominating these seven because a) I want to know seven things about you, and b) if this were a proper award, with champagne and stuff, you would totally deserve it. If you decide to participate yourselves, please link your blogs back here so I don’t miss the post!

Seven things about me

One. I am supremely clumsy. If all the clumsy people in the world got together on an island, I would be their Supreme Leader (which, by the way, best job title in the world). My crowning glory in winning this achievement is the time that my trip to Italy was cancelled after I fell off a giant hat in Spain. True story. I was going to go to Venice and Pompeii and everything. *sniff*

Two. The original reason for my clumsiness is that my vision is rubbish — the follow-on reason is that once you twist your ankle a certain number of times, the ligaments and whatnot just give up the ghost. But back to the vision thing: without my glasses I’d bump into walls. Or fall off them. As well as being chronically shortsighted, my vision is uneven too, so my depth perception isn’t great — I have enough that I can drive a car but not enough that I don’t fall off giant hat. Apparently.

Three. I would be a cat person if I could, because cats suit my extreme laziness. They’re easily housebroken and slothful, like me. I even have a cat tattoo. Unfortunately, my immune system treats them as the hostile invaders they are, so I am not a cat person. Instead, I am a dog person. But not a puppy person. I have a puppy at the moment, and although he is growing more tolerable as he gets older, the puppy phase is so trying.

My tattoo may look cute, but I’m pretty sure it’s plotting something. Look at those eyes!

Four. I’m an Aries. If you believe these things, that means I’m stubborn, goat-like and enjoy eating grass and headbutting others. Or something. I was also born in the Year of the Dragon, so if I get indigestion, watch out I don’t breathe fire on you. (Since Aries is also a fire sign — goats being known for playing with lighters — that is twice as likely.)

Five. I am a single mother. I didn’t start out that way, but life twisted and turned like a twisty turny thing, and here I am. My son has just turned five, and he’s the most adorable, precocious, hilarious, frustrating little human in the world. I love him to bits, naturally. 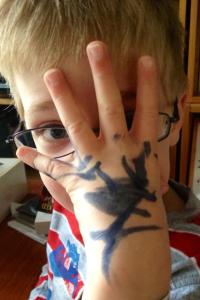 I think he wants a tattoo too. Eek!

Six. Since I probably won’t have any more children, I shall instead have book babies (a phrase that if you think about it too hard is actually a bit gross). The process of producing a book from conception to final realisation — when you get to hold the book and pat its cover and change its nappy — takes a hell of a lot longer than having a regular kind of baby. But my books don’t backchat. Much.

Seven. My first ever band crush was when I was in my early teens. It was New Kids on the Block. Because at the time I was deaf to the offensiveness of 90s synth music, and mullets were cool. Now my favourite instrument is the violin or the human voice. Several of them, in harmony — instruments optional. Aww, yeah.