Fiona is the gender-flipped Finn. (The books are there because they look good together!)

(Note: If you’re new to Adventure Time and care about spoilers for kids TV, this post is not the one for you.)

I don’t normally blog about TV shows, mostly because I watch hardly any TV these days, aside from Doctor Who. (I used to watch Castle, but the most recent series lost me.) The shows I do see tend to be kids shows, because that is what my seven-year-old is watching.

I got into a discussion with some other parents of kids who are a similar age to my boy about appropriate television, and there seemed to be a consensus that Adventure Time was not appropriate television for pre-teens. The arguments mostly revolved around the violence — the main characters, Finn and Jake, do spend rather a lot of time beating up bad guys, and occasionally said bad guys can be hella creepy and kind of gross.

However, the stories that this strange little cartoon tells are geeky, complex and deal with real-world issues in a fictional way, providing a great opportunity for kids and parents to discuss them. There are gender-flipped episodes (featuring Fiona and Cake rather than Finn and Jake), and so many Dungeons and Dragons-references that this is basically my favourite show too.

Adventure Time is set on Earth, in what I suspect is continental USA, though the land is called “Ooo”. A thousand years ago there was the terrible “mushroom war”, when mutogenic goo was spread across the land and and civilisation as we know it was wiped out.

Finn the Human is one of the only humans in the show. He was raised by his adoptive family, that of Jake the Dog. Finn is a traditional D&D paladin — he is honourable and defends the weak, something that often gets him into trouble. He spends a lot of time trying to find himself and figure out the complexities of love. At one point in the show he struggles with depression, after he meets his real father and discovers said father is an amoral, hardened criminal.

Jake the Dog is Finn’s adoptive brother and best friend. He has “stretchy powers”, meaning he can change into whatever shape he wants. His D&D alignment would be true neutral — he tries to do the right thing because of Finn, but is largely in it for fun. He’s lazy and has a criminal past that Finn doesn’t know about. He has children with his girlfriend, Lady Rainicorn.

Princess Bubblegum is one of the main characters; she is ruler of the Candy Kingdom. She’s a loner, mad scientist and genius, and has a complicated friendship with Marceline the Vampire Queen. (Almost all the kingdoms are ruled by princesses, to the point where, when Bubblegum is temporarily ousted from rule by a pretender calling himself the King of Ooo, he declares himself princess and stars wearing her clothes. Marceline is an exception, but she’s also the only vampire. The Ice King calls himself a king but only rules over penguins.)

The Ice King is the original villain of the show; he likes to kidnap princesses and wants to marry one. However, as we get to know him, we discover he has a tragic past (there’s one particular episode that makes me bawl every time I see it). His overall storyline is a parallel for dementia: he has forgotten who he is and his princess obsession is his subconscious mind’s way of trying to reclaim what he once had.

Lumpy Space Princess is homeless (she lives in the woods, in boxes or hollow logs) and looking for love. Marceline is so old that she struggles with morality, often acting like a selfish teenage girl. BMO, the robot who lives with Finn and Jake, has a vivid imaginary world and is gender fluid (though uses the male pronoun).

Other examples of geekiness include the Prismo wish spell alternate reality plot; discussion of Flame Princess’s alignment (and how acting out of alignment will affect her experience); and a dungeon-crawl episode where Finn gets lost, seeking more and more powerful loot. It’s glorious!

I guess for parents who won’t get the geeky references and would prefer their children experience a more Disney-like world, I can see why Adventure Time wouldn’t be their thing. But I for one love it. ❤

Getting to know me, with Cuddlebuggery 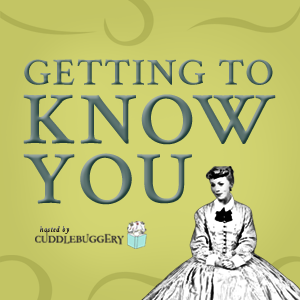 Today I’m taking part in the “Getting to Know You” blog hop hosted by Cuddlebuggery (I couldn’t pass up the opportunity to take advantage of that awesome blog name). I’m supposed to tell you guys a bit about myself, including my favourite book series EVAH. Gee, they aren’t asking for a lot there. 😉

Of course, if I had to pick just one it’d be the sentimental favourite that would win: the Dragonriders series by Anne McCaffrey. This won’t be a surprise to anyone that follows my blog, as I mention these books regularly when I do the Top Ten Tuesday blog hop. They were the first adult fantasy series I read (after The Hobbit but before Lord of the Rings) and opened my eyes to the fact that you don’t have to read serious, boring books as you grow older.

Given I read speculative fiction almost exclusively now, it’s a lesson I clearly took to heart.

Another way I’m steadfastly refusing to grow up is by gaming. There’s been a bit of computer-style gaming over the years — I had a WoW addiction there for a while, and more recently a Minecraft one. But mostly I’m talking about roleplaying, both live action (when I was younger, before becoming a mother reduced my opportunities for evening outings) and tabletop (still).

Live action roleplaying (or LARP) is what people who don’t roleplay think of when they think of roleplaying: people dressing up and pretending to be something they’re not. But with LARP you don’t sit around a table like the stereotype would insist; instead, you actually all meet at a venue and immerse yourselves in your characters. Think improvisational theatre.

The games I played were all part of the World of Darkness milleu: vampires and werewolves, mostly, with the occasional changeling and mage game. You’re all there with an agenda that will probably cause strife with another character, while in the meantime world events (as decreed by the Storyteller) try and screw you over. The idea is to create the most interesting story — although there are always people who are in it to “win”, which is the other reason I don’t play anymore.

Coincidentally, it is because of my time LARPing that I have a photo of myself dressed rather the same as the girl in the meme picture. SNAP!

The tabletop game I play is your traditional Dungeons & Dragons game; again, it’s sort of what you’d expect, only we don’t dress up. (YOU try sitting at a dining table for hours in a corset!) Instead of a storyteller there’s a “Game Master” who describes the setting, while the players are responsible for their own characters. It’s a great way to be a hero in your own story, with friends.

The leap from roleplaying to writing novels isn’t that big, to be honest — especially if you take a stint as GM, but even if you don’t. It provides writers with a great appreciation of the idea that the characters should drive the story. It doesn’t always have to be the players’ characters; the ones made up by the GM or Storyteller have their own motivations too. The waves of zombies may look aimless, but who is behind rising them? What does he or she want? How do we stop them and take all their stuff?! Game design tends to favour finding the villain/s and undoing their plots, which encourages stories where the villains have their own motives.

Obviously every game isn’t created equal, but I’m lucky that my current group are all experienced gamers and we have a similar approach.

So. That’s a think about me. I’m an unrepentant geek! SURPRISE!

Now, I promised a giveaway. Leave a comment telling me a little something about yourself (no matter how silly) and I will enter you in a draw to win a copy of the Isla’s Inheritance ebook. I’ll do the draw on 30 November, my time.

Edit: So, since I had exactly ten entries, I decided a d10 (that’s a ten-sided dice for you non-geeks!) was the best way to pick a winner. But my dice bag is downstairs and my phone is here, so I used a dice-rolling app instead… 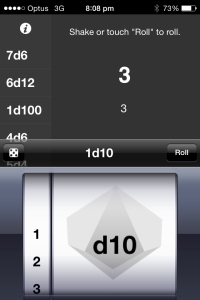