My son just turned nine (wut) and had requested a Harry Potter party. Our house is very small with no discernable yard — and it’s winter here — so we decided on a “movie” pyjama party, based on my misguided theory that kids in their PJs would be less likely to run around shouting.

Needless to say, very little movie-watching took place. But fun was had regardless. I thought since it was a book-related party I’d share my experience here, in case it is of benefit to others.

(Note: Check the run time of the movie before you start. I forgot quite how long Harry Potter and the Philosopher’s Stone actually runs — we didn’t quite make it through the movie before the other parents came to collect their kids. It wasn’t a big deal, though, given how little time was spent in front of the TV.)

Our budget didn’t stretch to actual Harry Potter brand food, especially since I’d have had to order it in from the UK, so I made do. We bought lolly snakes, chocolate frogs and other snacks, but then I gave them a Harry Potter theme by labelling each bowl with Honeydukes-inspired labels. (This also meant I could flag the contents of each for those kids with dietary requirements.)

For example, the snakes became “Basilisk Bites” and our Jelly Belly jellybeans were “Bertie Bott’s Every Flavour Beans”. My son and I got around the fact they weren’t every flavour by faking it, which the other adults got in on. “Oh, gross, I just got a soap-flavoured one!”

My son doesn’t like icing (I know, right?) so we decided to do homemade muffins in house-coloured cupcake wrappers instead. I googled “butterscotch muffins”, thinking I’d claim they were butterbeer, and ended up using this recipe from taste.com.au. I found it was a little dry, so added a little extra buttermilk, and because we didn’t use the caramel sauce due to my fear of sticky pre-teens, I added a splash of maple syrup as well. I’m not a baker, generally, so I was pleased at how nicely they turned out.

The one Potter-ish food thing I did order was the cupcake toppers, which were super-easy to apply. I did have to add a very thin layer of icing sugar (with a splash of boiling water to make a paste), just to get the toppers to stick, but I got away with it. 😉

Far and away the most time-consuming (but satisfying) part of the party prep was making the wands. My talented friend Craig and I spent hours on these, though the materials themselves were quite cheap: a packet of wooden chopsticks, a glue gun and a packet of beads. Craig already owned the paint, which would’ve been a huge extra expense if I’d had to get it myself.

Each kid got to chose a wand — there were six children and twelve wands, so I get the spares! — and I’d done up a card for each one with a core and wood based on this page, so they all had unique “powers”. The kids spent the vast majority of the party dividing into tribes and flinging curses at each other. It was a little Lord of the Flies, not gonna lie, but they had fun. 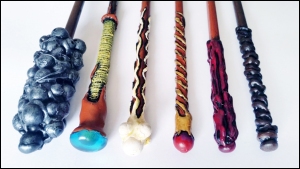 Photos, detail work and amazing talent by Craig. Dribbly “organic” wands by me.

I painted the party hats black and then used my glue gun to stick stars all over them. Quick and easy! 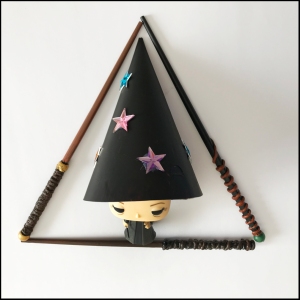 All the kids who came knew their Hogwarts houses in advance (because we’re those sorts of people), but I’d downloaded and printed a couple of origami “sorting hats” from this site, which got quite a bit of use.

This was regular pass the parcel, but with toy snakes, lizards and frogs in each layer.

Stick the Sock on the Dobby

I drew Dobby onto a sheet of A3 cardboard and then made socks for the kids to stick on him with sticky tac. I had prizes for those that got their sock into his hand and for the funniest placement (which ended up being an earring). 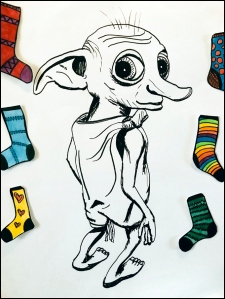 As well as pausing the music, I used my wand to cast the charm “immobulus” (the freezing charm). It was a bit of a juggle managing both, so I had to get the other parents to judge who was out each round.

I had organised a few other party games that we didn’t get to because the kids wanted to get back to flinging curses.

Again, I didn’t have a huge budget for prizes, so I went for theme rather than brand. As well as the parseltongue lizards etc, I found a cheap pack of dragons at the local two dollar shop. I stuck some googley eyes on pompoms and called them pygmy puffs. I bought a grey Ikea rat to be Scabbers, and a little while owl to be Hedwig.

I had more prizes than we actually needed, so I divided up what was left into the party bags at the end. (Except for Scabbers. He lives with me now.)

All in all, everyone had fun — including me, as the whole thing appealed to my inner Ravenclaw. My boy has already told me he wants a Doctor Who party next year, which I think will be trickier.

For now, I’ll be over here, collapsed in a pile of wizarding robes and left-over lollies. 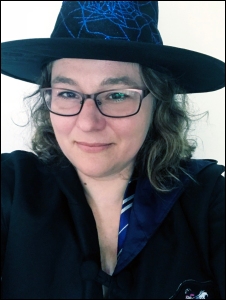