← Review: ‘Their Fractured Light’ by Amie Kaufman and Meagan Spooner
Review: ‘The Incredible Adventures of Cinnamon Girl’ by Melissa Keil → 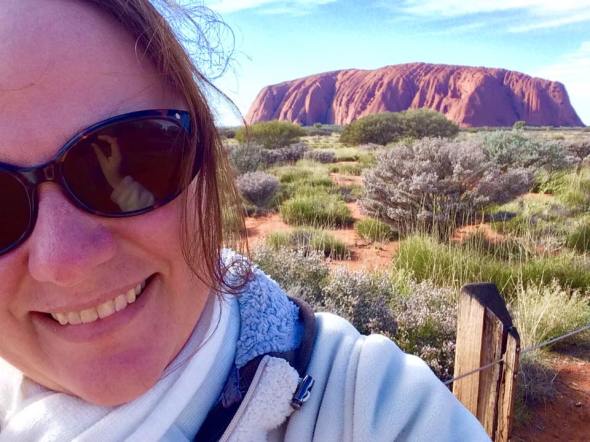 You may have noticed that — prior to the review of Cinnamon Girl that I posted on the weekend — I vanished off the radar for a week or so there. Or maybe you didn’t, given my posts on this blog can be sporadic at times. Either way, the absence was because my son and I went north (where the warmer weather is in Australia) for the winter.

Good friends of ours moved to central Australia at the start of the year, so we went to stay with them and do local touristy things — the biggest of which was a two-night stay at Yulara, the resort near Uluru.

You’ll probably guess from the above photo that it wasn’t as warm as I might have hoped. The weather was interesting, I don’t know, maybe it’s typical for a desert, but it seemed to change from day to day without much sense to it. One day it’d be cold — coats and scarves weather — and the next it’d be shorts and T-shirts weather. We got fewer of the latter kind of day than I might have liked, and two of them were the day we arrived and the day we left again. Typical!

That being said, the lowest maximum temperature we got while on holidays was still higher than the highest maximum in Canberra during the same period, so I shouldn’t complain. And it was wonderful to catch up with our friends. They have two girls, the younger of whom is close to my boy, so he had a lot of fun having a playmate in his pocket. Of course, I also got an insight into what it might have been like if I’d had two kids. So. Much. Bickering. Gah!

And Uluru was … well, it was everything I could have imagined, and several things I hadn’t. There’s something about seeing a cultural icon, a popular landmark, in the flesh for the first time. You’re so used to it being on postcards or the TV that, when you see it with your own eyes, it’s both unfamiliar and so familiar that you feel like it’s the landscape equivalent of an old friend. I’m positive at least part of my awe of the place was that feeling.

Another significant part was the overwhelming sense of the Aboriginal history. Cave art, sacred spaces where photography was discouraged, rock formations that looked like snakes or spear holes and so became them in dreamtime stories. I could easily imagine young hunters stalking across the dunes, spears in hand as they hunted for prey.

The rest of my awe was at Uluru itself. Not only is it one of the world’s biggest rocks, it stands out in the middle of a sandy plain — the terrain makes it even more striking. There were a few things that really struck me about it. Because central Australia has had a fair amount of rain recently (relatively speaking), there was a lot more greenery than I’d imagined, the rust red sand dunes covered in clumps of grass and low shrubs. We also visited a couple of waterholes at the base of the rock during our day there — they weren’t lakes by any stretch of the imagination, but there was more water than I’d imagined in a desert. One of them was swarming with tadpoles, and the other had water trickling down into it from the top of the rock, probably the remnants of overnight dew, despite it being mid-afternoon.

Finally, despite Uluru from a distance looking exactly as I’d dreamed it would, when I got up closer I was surprised at how many crevices, caves and protrusions there were. Later I discovered that, from the air, it looks sort of like a fat, wrinkly, reversed comma. (Someone make a font for that!)

Now, as much as I’m sure you’re loving hearing me ramble about my holiday, there is a point to all this. Research is great. I’m a huge fan of Google street view and Wikipedia. Huge. But, where you can swing it, there is no substitute for actually going to the place you’re writing about. I’m not writing a book set in central Australia — not yet. But visiting there sure made me want to try.