Today I’m thrilled to have one of my favourite writers and human beings on the planet here with me on the blog — it’s the lovely Stacey Nash! You may remember her from such reviews as my one on Remember Me four days ago. Stacey’s second book, Remember Me, came out on 1 October, which makes her and I release month buddies. To celebrate, I’m giving away two copies of the first book in her series, Forget Me Not — details below.

Welcome to the blog, Stacey!

For those that haven’t read Forget Me Not, the first book in the Collective series, how would you describe the world you’ve created?

The world of the Collective series is one where super-advanced tech exists, like devices that allow cloaking, telepathy, and teleportation. This tech has actually been around for a very long time, but it’s kept hidden from the general public by a secret group whose sole purpose is to keep everything in the world on the right path. That group, the Collective, believes too much power in too many hands is not a good thing.

The Collective kind of reminds me of the Illuminati crossed with that Will Smith movie Men in Black (only without the sense of humour). Can you tell us a little more about how they work?

That’s a great description of the Collective and they are very loosely based on the Illuminati. (I love a good conspiracy theory!) Remember Me takes a much closer look at the Collective than we got to see in Forget Me Not, and from a different angle too. The Collective honestly believe that they’re doing the right thing. That with the type of technology available, society would fall into a power-grabbing mess and left to its own devices would not function effectively. It would be an all-out massacre, with no order and every man greedily overthrowing every other to come out on top. So the Collective not only suppresses knowledge of advanced technology from the public, they use it to maintain order. 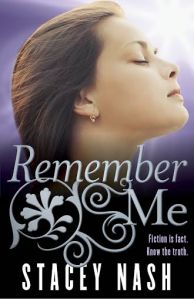 Remember Me is told by both Anamae, the main character from the first book, and her best friend Will. Tell us a bit about them.

Anamae is one of those girls who are so tenacious no one can keep her check, and god help anyone who tries. She’s seventeen and has been through a tough time. Her mother has been missing for a very long time, and her dad faced some life-threatening issues during book one. With no other family, she realises she needs to fight back for what’s right.

As for Will, he’s one of those characters that finds his way into everyone’s heart. He’s a little overbearing at times, but he’s got a kind heart. He’s been in Anamae’s life since they were in grade school together and he’s not about to take a back seat now that they’re fighting for their lives.

Forget Me Not originally came out with a small press, which subsequently collapsed. What do you know now that you wish you knew then? What advice would you give to writers just starting out in the business?

I don’t think anything I know now would have changed my decisions back then. I didn’t blindly sign with that small press. I researched them thoroughly before I did so. I checked them out on Editors and Predators, Absolute Write Water Cooler, Google, and everywhere that I could. I even spoke with authors I knew who were signed with them. And staff — I spoke with staff too. Everything was really happy there, and everything checked out. I guess I’d tell other writers to make sure you do all that before signing, but be aware that publishing in some ways is a gamble. You just can’t predict what will happen and there are bad publishers out there amongst the good. It’s not all sunshine and rainbows. Make sure you remember that and you’ll be more wary.

What other projects are you working on? Can we expect to see a third book in the series sometime soon?

I’m working on a few projects right now. There are four books in total planned for the Collective Series and book three has gone off to my publisher, so hopefully there will be more news on it soon. My current project is a prequel to the series. Set long before Anamae was born, it’s told by her mother and essentially it is Annie’s story. Which is an exciting part of Collective–Resistance history. I’ve also got a new series in the pipelines which I’ve been madly working on. It’s quite different to the Collective books, with slightly older characters and a contemporary setting. I hope to be able to share some news on it soon as well.

Enter for a chance to win one of two Forget Me Not ebooks!

Stacey Nash writes adventure-filled stories for Young Adults in the Science Fiction and Fantasy genres. She loves to read and write books that have a lot of adventure, a good dose of danger, a smattering of romance, and KISSING! Hailing from the Hunter Valley in New South Wales, she loves nothing more than immersing herself in the beauty and culture of the local area.