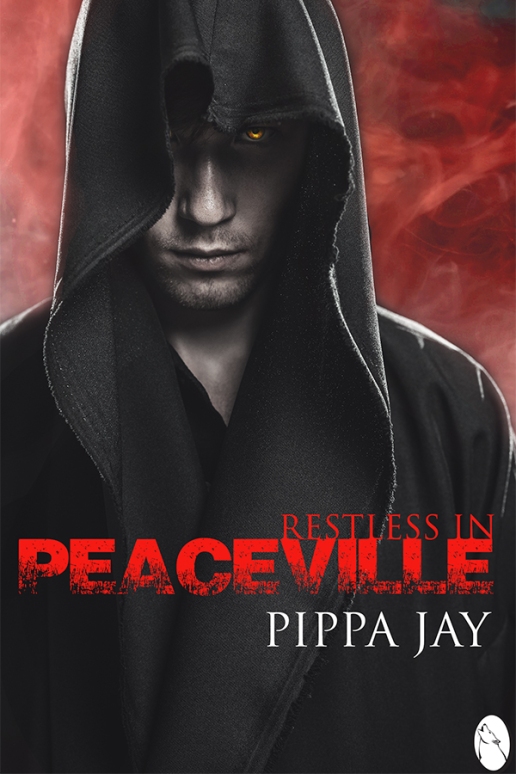 Welcome to Peaceville, population 2067 and rising…from the grave…

Luke Chester has had enough. He’s the school geek, the girls laugh at him, he’s lost his dead-end job at the pizza place, and in the midst of the world’s messiest divorce his parents don’t even know he exists. An overdose of his mom’s tranquilizers and a stomach full of whiskey should solve all his problems…

But they don’t. Instead, Luke finds himself booted out of the afterlife for not dying a natural death, with nowhere to go but back to his recently vacated corpse and reality. How the hell is he going to pass for one of the living without someone trying to blow his brains out for being one of the undead?

And it just gets worse. He’s got to fight his own desperate craving to consume the living, evade the weird supernatural hunter who’s having a field day with the new undeads rising, and there’s this creepy black shadow following him around. Add to that the distraction of female fellow undead Annabelle burning to avenge her own murder, and clearly there’s no rest for the wicked. Jeez, all he wanted to do was R.I.P.

A YA supernatural novella, coming from Lycaon Press 20th August.

Add it to your Goodreads shelf HERE.

Sign up to Pippa’s no-spam newsletter HERE to get early sneak peeks at covers, and news of the latest releases, giveaways and contest.

Where the hell am I?

Not the most original question, I know, but it’s the best place to start. The only place. I don’t know where I am. I can’t remember where I was. What I was. But nothing about this place is familiar, and some part of me didn’t expect this.

There’s a line of people all the way to infinity. I’m not exaggerating—I do mean infinity. And it hurts to look at it because the human mind can’t handle that. Not completely. You think you know how that looks? You don’t. You can’t. Try to imagine the whole of creation. Can you see every last ant, every last star? No.

Around us—well, it’s a big gray hall. A really, really huge space, like an aircraft hangar kind of place, only no planes and no doors. In fact, no walls or roof either. The edges just blur into the darkness, as though none of it exists except the floor we’re standing on, and I’m not even sure about that. Looking up makes me giddy. You know when you’re dizzy from spinning around, and you lay down, but you feel as if you just keep on falling? That. So I don’t try it again. I keep my eyes away from the endless line of other people waiting. Instead, I stare at the back of the person in front of me and try not to think about where I am and what may be going on. Because now I have a nasty suspicion about it and what might have happened. My mind scurries away from the thought. This ain’t good.

Oh, by the by, my name is Luke Chester. That much I do know. I can’t be that old—my hands aren’t wrinkled or calloused, although there’s a cool scar across my left palm. My skin is pale gray. So are the long sleeves of my T-shirt. In fact everyone and everything is gray, just like the room. I stare at the guy in front of me, hoping for some clues. He has dreadlocks and his skin is so dark as to be almost black. He’s wearing a tank top, torn and covered with dark streaks that something tells me should be red, but, like everything else here, have no color. There are two deep slashes in the back of his neck, and more on his arms. They aren’t bleeding though. I guess they’ve all dried up, or maybe he’s all bled out. His jeans are ripped too, although that could be a fashion thing. I can’t see any wounds on his legs.

I look down at myself. My jeans are in one piece, but my feet are bare. I wriggle my toes and watch them dance like I’ve never seen them move before. I can’t feel the ground. I don’t feel warm or cold, just kind of numb, and distant. It’s as if I’m not really here, but clearly I am. What happened to me? How did I get here? That bothers me. I shouldn’t be here. Then again, I’m not sure where else I should be.

After spending twelve years working as an Analytical Chemist in a Metals and Minerals laboratory, Pippa Jay is now a stay-at-home mum who writes scifi and the supernatural. Somewhere along the way a touch of romance crept into her work and refused to leave. In between torturing her plethora of characters, she spends the odd free moment playing guitar very badly, punishing herself with freestyle street dance, and studying the Dark Side of the Force. Although happily settled in the historical town of Colchester in the UK with her husband of 21 years and three little monsters, she continues to roam the rest of the Universe in her head.

Pippa Jay is a dedicated member of the Science Fiction Romance Brigade, blogging at Spacefreighters Lounge, Adventures in Scifi, and Romancing the Genres. Her works include a YA science fiction novel—Gethyon—published through BURST (Champagne Books), two self-published short stories (Terms & Conditions Apply and The Bones of the Sea), and she’s one of eight authors included in a science fiction romance anthology—Tales from the SFR Brigade. She’s also a double SFR Galaxy Award winner, been a finalist in the Heart of Denver RWA Aspen Gold Contest (3rd place), and the GCC RWA Silken Sands Star Awards (2nd place).

You can stalk her at her website http://pippajay.co.uk, or at her blog http://pippajay.blogspot.co.uk, but without doubt her favorite place to hang around and chat is on Twitter as @pippajaygreen.

One Comment on “Cover reveal: ‘Restless in Peaceville’ by Pippa Jay”