Today’s guest post is by Tessa Gratton, whose book The Strange Maid comes out next week. This one sounds amazing, you guys; I’ll include the blurb below her post so you can see what I mean!

Take it away, Tessa!

Here is my first secret of world building: everything grows out of world.

If world, character, and plot are a pyramid, world is the wide base, character the slender middle, and plot the tip top. Your world is the history, culture, family values, politics, laws, etc, and characters cannot exist without interacting with those things, because people may be born with certain inherent qualities, but we are also products of culture and family and community. What your character believes and how she dresses MUST be in response to the world around her in one way or another. And plot is dictated by what your character WANTS. What does she desire? How will she survive? 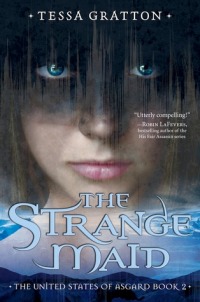 That is the only ultimate truth of writing I believe in.

You CAN reverse-engineer the pyramid, if you are a plotter, but to readers, it must seem as though world à character à plot or they’ll begin questioning everything.

Sometimes as writers we think of characters first, or initially are inspired by a plot point, and so world building requires some backtracking. But with the United States of Asgard series, the process followed my pyramid method smoothly (which was a relief, since almost nothing else went smoothly!).

I thought of the world first, when I realized about 9 years ago that the political discourse of my country was engaged firmly in warrior culture – and at the time I was studying Viking and Anglo-Saxon warrior culture. What if I combined the two into a modern US founded by Vikings and their powerful, selfish gods?

I spent nearly four years playing with the idea of the world itself before I found my characters for the first book, THE LOST SUN. I read about history and politics, jotting down notes about how this fusion education system might work, how the branches of government would differ and how they’d be the same. I thought about each of the prominent gods and how they could be used as tools to reflect the themes of war and politics and religion that I wanted to write about. I made notes about the sort of teenagers might be most compelling as heroes: which is how I found my heroes Soren and Astrid. I wanted a teen berserker and a teen prophetess, both modernized versions of the most fascinating aspects of human–god interactions I found in the old Norse mythology.

My plot came from a fusion of world and character desires: 1) Baldur the Beautiful I knew was a god of hope and light, and the most poignant symbol of the fusion of old religion and modern celebrity culture. He is a dying god, literally dying in the fall and resurrecting in the spring, and all of it caught on television cameras. 2) Soren and Astrid both struggled with faith, even in a world where gods are obviously real, and they both needed a quest to find themselves and their destinies. What better quest than a road trip to find a dying god who didn’t rise? 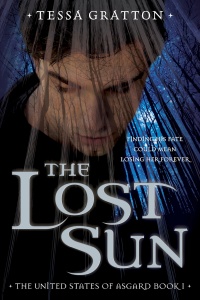 So that’s what I mean by world begets character begets plot.

And of course with the second and third books, the pattern remained the same, though to a certain extent I had some plot ready and waiting because of happenings from the first book. But I knew that in book 2 I wanted to write about a teenaged Valkyrie, and her plot grew from that, and why she was a Valkyrie grew from the world. Valkyrie are connected to Odin Alfather and Freya the Witch, and so I needed to surround Signy with war, madness, poetry, and prophecy, the things those gods represent. I needed to delve into the Valkyrie’s Council and how they relate to Congress and the president and the media, and find those dark corners where politics and media culture connect to madness and poetry and prophecy. It was hard, and fascinating, and in the end worth-while because I think Signy is the most “New Asgardian” of any of the characters I’ve created for the series. There is no real-world correlation for her, I think, an idea that both excites and terrifies me.

As someone who loves world building and admires those writers who do it spectacularly, I hope I can in the future say that about all my characters, because that’s the point of world building: making a place so real, so layered and believable that it’s impossible for readers to divorce a character from their world.

About The Strange Maid

Fans of Neil Gaiman, Holly Black, and Maggie Stiefvater will embrace the richly drawn, Norse-influenced alternate world of the United States of Asgard, where cell phones, rock bands, and evangelical preachers coexist with dragon slaying, rune casting, and sword training in schools. Where the president runs the country alongside a council of Valkyries, gods walk the red carpet with Hollywood starlets, and the U.S. military has a special battalion dedicated to eradicating Rocky Mountain trolls.

Signy Valborn was seven years old when she climbed the New World Tree and met Odin Alfather, who declared that if she could solve a single riddle, he would make her one of his Valkyrie. For ten years Signy has trained in the arts of war, politics, and leadership, never dreaming that a Greater Mountain Troll might hold the answer to the riddle, but that’s exactly what Ned the Spiritless promises her. A mysterious troll hunter who talks in riddles and ancient poetry, Ned is a hard man to trust. Unfortunately, Signy is running out of time. Accompanied by an outcast berserker named Soren Bearstar, she and Ned take off across the ice sheets of Canadia to hunt the mother of trolls and claim Signy’s destiny.

Tessa Gratton has wanted to be a paleontologist or a wizard since she was seven. Alas, she turned out too impatient to hunt dinosaurs, but is still searching for a someone to teach her magic. After traveling the world with her military family, she acquired a BA (and the important parts of an MA) in Gender Studies, then settled down in Kansas with her partner, her cats, and her mutant dog. She now spends her days staring at the sky and telling lots of stories about magic. Monthly free short stories with Maggie Stiefvater and Brenna Yovanoff at The Merry Sisters of Fate: www.merryfates.com 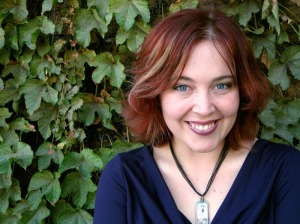