Excerpt and giveaway: ‘Elsker’ and ‘Tur’ by S. T. Bende

What reviewers are saying about The Elsker Saga:

“The characters will leave an imprint on your heart and mind for a long time to come.” — Lisa (Bound by Books)

“Bende takes classic bits of Norse mythology and throws in original elements to create her own tasty Nordic blend… I’ll definitely be checking out the sequel!” — Bookalicious Reviews

“One of my favorite books of the year.” — White Zin Bookends

“Action packed with a heart pounding romance!” — Curse of the Bibliophile

“This book was nearly impossible to put down and I’m dying for the sequel!” — Brittany and Bianca Blab Books (now BiblioBelles) 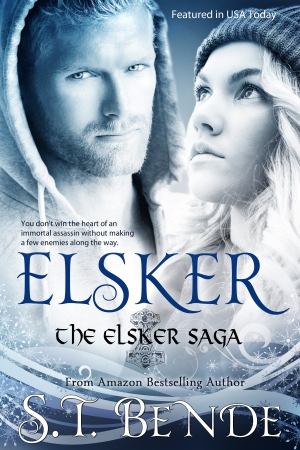 You don’t win the heart of an immortal assassin without making a few enemies along the way. Kristia Tostenson prefers Earl Grey to Grey Goose and book clubs to nightclubs, but when she transfers from her one-stoplight town to Cardiff University in Wales she falls in love with Ull Myhr. Her new boyfriend isn’t exactly what she was expecting. He’s an honest to goodness Norse God – an immortal assassin fated to die at Ragnarok, the battle destined to destroy Asgard and Earth. Kristia’s crazy visions are the only thing that can save their realms. 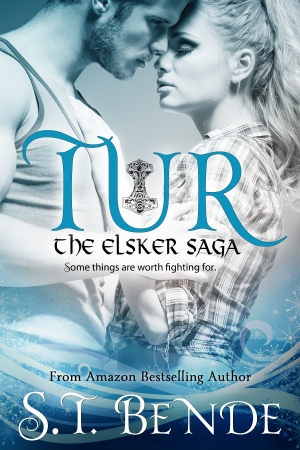 Inga Andersson is the envy of every girl in Asgard. On the surface she has it all — great friends, a job as Odin’s personal fight choreographer, and a happy ever after with her realm’s hottest assassin. But when evil invades Asgard, her perfect world comes crashing down. Someone is planning to kill off the gods, and Inga’s best friend Ull is first on their list. With the Norse apocalypse a nanosecond away, Inga has to decide how she’ll spend her final moments of freedom. Because from the moment this battle begins, Inga’s happily ever after will be nothing more than a memory.

Some things are worth fighting for.

“Are you sure you will be all right on the stairs?” Ull stood in the grand hall of Cardiff Castle, glancing at the four-inch, shiny death-traps Victoria called shoes. Since Ull’s eyes practically bugged out of his face when he picked me up, I had no intention of changing into the emergency flats I’d stuck in my purse. Victoria had scored another hit.

“Probably not. Walk behind me in case I fall?”

“It would be my pleasure.”

“On our right, the coats of arms,” continued the tour guide. He’d been talking for a good five minutes and I couldn’t remember a single word. That was because Ull had started stroking the small of my back when our tour began, and it took all my concentration just to stay upright.

“The castle is gorgeous.” I admired the stonework as we made our way toward the stairs. There I shifted focus to my feet, staring at each step until I’d reached the top. “Made it.”

“And I was so hoping I would get to catch you.” Ull came up next to me and skimmed my hand with the pads of his fingers.

“Well, the night is young and these shoes are high. You may still get your chance.”

“Um.” I swayed on the heels and he chuckled.

“Come, Miss Tostenson. We are losing the group.”

We walked the long corridor framed with paintings. All of the history in these walls was kind of overwhelming. The castle was two thousand years old. The oldest thing we had back in Nehalem was probably the Homestead. Cardiff Castle had about eighteen hundred years on that farm.

“This place is huge,” I whispered when we’d caught up to the tour. “I can’t imagine living here. How could you ever get comfortable?”

“You get used to it,” Ull shrugged. “Find little corners to make your own.”

“How on earth could anyone get used to all of this?”

“When you are stuck in it every day it gets old. Trust me.”

“Right.” Like Ull was an authority on royal dwellings. “Living in a castle sounds sooo terrible.”

“Depends on the day.”

“What does that mean?”

“Just that these walls did more than keep people out — they kept people in, too.”

I thought about my vision from Friday night — of Ull and me in a meadow by a castle. Huh.

“Where did you say your family lived, exactly?” I probed.

But Ull bristled. I’d hit a nerve. “Come Kristia, we have lost our group again.” He gently pulled me down the hall.

“You may have noticed the Animal Wall in front of the Castle. Though William Burges designed the Wall in 1866, it was not constructed until 1890 — nine years after Burges’s death.” The guide lifted an eyebrow as we caught up. “Please do try to stay with the tour,” he admonished before turning down another corridor. The rest of the group followed closely.

Ull raised a corner of his mouth in a smile. “Why, Kristia, you are blushing.”

“And?” I lifted my chin, and took a step back so I stood against the wall.

“It is sweet.” Ull paused and lifted a finger to my cheek. My knees buckled and he grabbed my arm to steady me. The touch sent shockwaves straight to my head, leaving me with the unnerving sensation of being underwater. I lost my bearings again and Ull wrapped both hands around my waist to stop my fall.

“Sorry,” I mouthed. “Must be the shoes.” I couldn’t stop staring at his eyes. They almost looked nervous.

“Must be.” He ran his finger along my jaw, stopping to grasp my chin between his thumb and forefinger. His eyes focused on my mouth and my heartbeat accelerated. He ran his thumb lightly over my lips. They parted under his touch. A wave of heat shot from my lower lip straight to my abdomen, creating a slow burn that wasn’t altogether uncomfortable. I watched as his eyes slowly moved down then back up, lingering at the neckline of my dress. Victoria had been right about the push-up bra.

Ull drew his eyes away from my cleavage and took a step closer. He leaned one forearm against the wall, leaving me enveloped between the cold stone and his warm chest. I was suddenly very dizzy.

“Kristia,” he spoke in a whisper.

“Yes?” I whispered back. Ull was looking at me with an intensity I wasn’t prepared for. He stepped in, closing the last inch between us.

“Look at me.” He spoke again, lifting my chin so my lips were tilted towards his. If his body hadn’t been pressed against mine, I would have collapsed in a heap that instant. Instead, I took a shaky breath as Ull dropped his head. He ran his nose along my jaw line, pausing when he reached my ear. He breathed in, the cool air sending a shiver down my neck. With painstaking slowness he drew his nose across my cheek until our lips were almost touching. Now when I looked into his eyes I saw something entirely different. He was strong. Confident. And very much in control.

I let out a small sigh and immediately he covered my mouth with his. It wasn’t a gentle kiss — it was commanding, almost forceful. I melted against him as he claimed my lips, moved down my jaw to consume my neck. My insides throbbed. In that moment, I would have done absolutely anything he asked me to.

“Mmm.” It was the best I could muster by way of response.

“Will you be joining the rest of my tour, or shall I leave the two of you here?” The guide stood at the end of the corridor, literally tapping his foot. Oops.

Ull placed his hands around my waist to right me. I smoothed my hair and straightened my dress, my cheeks burning the whole time.

“Great timing,” I muttered. Just when things were getting good.

“Do not worry Kristia.” Ull winked. “We have all the time in the world.”

I sure hoped so.

Before finding domestic bliss in suburbia, ST Bende lived in Manhattan Beach (became overly fond of Peet’s Coffee) and Europe… where she became overly fond of the musical Cats. Her love of Scandinavian culture and a very patient Norwegian teacher inspired the ELSKER series. She hopes her characters make you smile and that one day pastries will be considered a health food.

To feature or review Elsker, contact ST at stbende@gmail.com . Thank you for your consideration!!