← Finding new Twitter follows more lazy ways: hashtags and advanced searches
Knowing When to Follow the Rules and When to Break ’Em →

I came a little unstuck in drafting my current work in progress last week. The WIP is an urban fantasy, like my last two, but this time it’s for adults rather than young adults. Anyway, I was working on a fight scene and, halfway through drafting it, I drew a giant mental blank as to what to do next. My muse basically stormed off to her trailer with a sassy flick of her hair and a rude gesture. 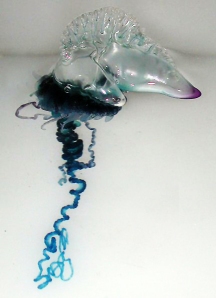 Bluebottle aka Portuguese Man-o-War. These things strike fear into the hearts of Australian children every summer at the beach. (Image from Wiki Commons.)

The problem I had was that I was working with a non-traditional bad guy (rather like an evil flying jellyfish), so its attack options were pretty much limited to striking out with its tentacles. And my leading lady, Melaina, wasn’t using any weapons either.

I had a whinge about it on Twitter and my tweep Pippa recommended I buy Rayne Hall’s ebook, “How to Write Fight Scenes”. I’m almost halfway through reading it (a lot of the chapters are about types of weapons, for example, so they are interesting but not directly relevant to my current scene). But it managed to get me unstuck.

I’d worked Melaina’s combat weakness into the book already, but emphasising it a little more in the scene established the stakes, which is important if I want the readers to be cheering for her as the underdog rather than having a little snooze. For example, in typical Hollywood fight scenes I tend to get bored and start thinking about something else—because the scene usually involves a lot of stunts but no real sense that it advances the story, and no real risk to the protagonists.

The other problem was that, given Melaina was fighting unarmed, I needed to have her use the environment. And my initial description of the place where the fight takes place built up the atmosphere but didn’t really include any features she could use as weapons. So last night I went back and added a couple more things that she could use—including the “weapon” she used to strike the killing blow.

She killed that flying jellyfish good! 😉

I think it’s easy for writers of speculative fiction—where their characters are magic users of one stripe or another—to forget that all magic needs to have a cost to the user. Otherwise, the magic users become overpowered demigods. And where’s the fun in that?