Review: ‘My Story’ by Julia Gillard 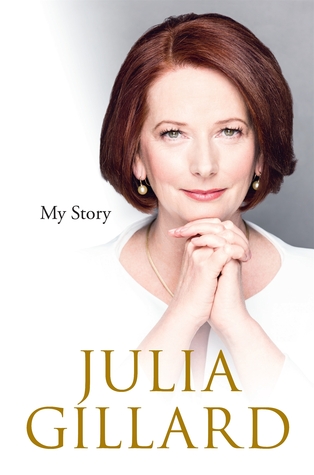 On Wednesday 23 June 2010, with the government in turmoil, Julia Gillard asked then Prime Minister Kevin Rudd for a leadership ballot.

The next day, Julia Gillard became Australia’s 27th Prime Minister, and our first female leader. Australia was alive to the historic possibilities. Here was a new approach for a new time.

It was to last three extraordinary years.

This is Julia Gillard’s chronicle of that turbulent time – a strikingly candid self-portrait of a political leader seeking to realise her ideals. It is her story of what it was like – in the face of government in-fighting and often hostile media – to manage a hung parliament, build a diverse and robust economy, create an equitable and world-class education system, ensure a dignified future for Australians with disabilities, all while attending to our international obligations and building strategic alliances for our future. This is a politician driven by a sense of purpose – from campus days with the Australian Union of Students, to a career in the law, to her often gritty, occasionally glittering rise up the ranks of the Australian Labor Party.

Refreshingly honest, peppered with a wry humour and personal insights, Julia Gillard does not shy away from her mistakes, as well as detailing her political successes. Here is an account of what was hidden behind the resilience and dignified courage Gillard showed as prime minister, her view of the vicious hate campaigns directed against her, and a reflection on what it means – and what it takes – to be a woman leader in contemporary politics.

Here, in her own words, Julia Gillard reveals what life was really like as Australia’s first female prime minister.

This is the first non-fiction I’ve reviewed on this blog, and it’s overtly political. What could possibly go wrong…?

For those that don’t know, Julia Gillard was Australia’s first (and, to date, only) female prime minister. A member of the Labor party, our equivalent of the US Democrats, she came to power in controversial circumstances, replacing Kevin Rudd. Rudd seemed to present well interstate but here in Canberra, where the federal government is based, he had a reputation for being angry, disorganised and hell to work for. He did some good work with the GFC, but when he dropped the ball on environmental reform, his polling numbers tanked.

Consequently, I think Canberrans were among the least surprised when Gillard took his place as PM.

I was always fond of Gillard, especially when she was being fiery and speaking off the cuff (her canned speeches, on the other hand, were a cure for insomnia — sorry, Jules, but they were). Some of that was because her politics broadly align with mine. A lot of it was because of the abhorrent way she was treated by the conservative media and the lunatic fringe. I felt a certain girl power solidarity, you know?

So, with that huge disclaimer, what did I think of My Story?

Bits of it, especially the first third, were riveting. Bits of it were, as the blurb says, wryly funny. Bits of it — especially her insights into Rudd’s behaviour after he was ousted — filled me with righteous indignation. (Australia is in the grip of conservative government now, and it’s fair to say that Rudd is largely responsible for that. Thanks very bloody much, Kevin.)

But bits of My Story were kind of a cure for insomnia too.

This is the first political memoir I’ve read, and it makes sense that politicians in these kinds of books will be keen to establish their legacy, in their own words. And while I enjoyed the personal anecdotes and the insights into negotiations, I really zoned out during the talk of numbers and budgets and something about nominal growth? What? If I’d been reading the paperback, I would’ve skimmed the middle section, but because I was listening to the audiobook I slogged through the whole thing while cooking dinner and colouring in. (Adulting is hard.)

Maybe if I’d paid more attention, I would’ve gotten more out of it. :p

Still, Julia was gracious in acknowledging where others had done good work — even Rudd, in the early days. She was also honest about the places where the Labor government went wrong on certain policies and decisions, and accepted the blame where she had a role in those mistakes. I respect that, as well as her ferocious intellect and her resilience.

If you’re on the centre/left of Australian politics, this is worth a read.