← The Anatomy of a Grammar Nerd
Mini-reviews: ‘Ensnared’ by A. G. Howard and ‘Hit’ by Delilah S. Dawson →

I’ve been tagged for the Coffee Book Tag by Cait from Paper Fury; since this tag combines books and coffee, two of my favourite things, I decided to get on board—although posting it has taken me a while due to Things (TM).

My post won’t be as beautiful as Cait’s. She took photos of all the books she mentioned, some of them artfully arranged with coffee beans or on lace backgrounds. This includes a photo of Isla’s Inheritance that is one of my favourites ever. Go check it out. I’ll wait.

As an aside, I can’t help but notice the last three “coffees” in the list are actually tea. I’M ONTO YOU, TEA! (Note: I like tea.)

Black:
name a series that’s tough to get into but has hardcore fans

Game of Thrones by George R. R. Martin. I really wanted to love this series, but I found it really hard to get onboard with. I think for me the problem was a combination of a lot of points of view, and the fact that some of those points of view were from people I wanted to punch in the nose…

I had the paperback of this, but eventually I gave up and gifted it to my then-housemate.

Peppermint mocha:
name a book that gets more popular during the winter
or a festive time of year

I’m not that aware of popular trends, so instead here is a book that I think of when I think of peppermint mocha and other wintery foods and drinks: Running Home by Julie Hutchings. Hutchings’s vampires use scent as a means by which they attract fated future vampires, and because it’s set in winter the descriptions of Nicholas from Ellie’s perspective are, well, mouth-watering.

Hot chocolate:
what is your favourite children’s book?

The Stone Cage by Nicholas Stuart Gray is a long-term favourite. I read it when I was in primary school, then again in year eleven, and then again as an adult. It’s the story of Rapunzel told from the perspective of the witch’s cat, and I LOVE it. 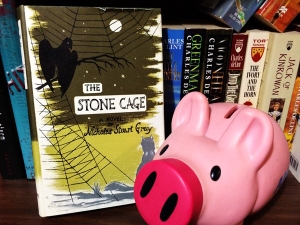 Double shot of espresso:
name a book that kept you on the edge of your
seat from start to finish

Blackbirds by Chuck Wendig. Most of Wendig’s novels are action-driven, but Miriam is the sort of character that ploughs into and through obstacles, because she just wants to keep moving. She’s racing against time and against herself and her own inner demons, and she doesn’t pull punches.

Fifty Shades of Grey by E. L. James—or at least that series. For a while it was the books, and then the books with the new, movie-inspired covers … and now it’s the next book in the series. (There used to be a Starbucks in Canberra, but it went out of business. Make of that what you will.)

That hipster coffee shop:
give a book by an indie author a shoutout

There are so many to choose from here (and I already mentioned one above), but it’s hard to choose just one. So here is a small pile of awesome indie love: The Problem With Crazy by Lauren K. McKellar, Shh! by Stacey Nash, and Immagica by K.A. Last. Yes, I have all of these in paperback, and SIGNED. You so jealous. 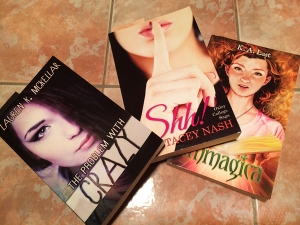 Oops! I accidentally got decaf:
name a book you were expecting more from

Half-Blood by Jennifer L. Armentrout. I’ve heard good things about this author, and I liked this book … but given the premise I really wanted to love it. The biggest flaw for me was that I found the protagonist so reckless that I swear I left an imprint of my hand on my forehead more than once.

The perfect blend:
name a book or series that was both bitter and sweet,
but ultimately satisfying

All the Weyrs of Pern by Anne McCaffrey made me cry and cry. And cry. But when I read it (as a teenager), I loved the way it wrapped everything up and finished off the story of Pern … more or less. I really want to re-read this series, although part of me is worried that I might not enjoy it as much, since I’m a much more critical reader than I was all those years ago.

Green tea:
name a book or series that is quietly beautiful

The Song of Achilles by Madeline Miller. I listened to this as an audiobook, and it was sometimes like listening to a poetry recital. Beautiful is really the only way to describe this book, even though parts of it are ‘ugly’ in the traditional sense. Miller doesn’t spare us any details of the bloody violence of war, just as she doesn’t spare any details of Achilles’ nimble feet or his golden hair. It’s a tragic story with an eternal romance and an uplifting ending. Perfect! ❤

Chai tea:
name a book or series that makes you
dream of far off places

I really wanted to name a book set entirely on a beach … but I’m sitting here drawing a mental blank. Aaaah! So instead I’ll go with Hogwarts, and name the Harry Potter books. Now there’s a place I’d love to visit.

What do you mean, Hogwarts isn’t real? Wash your mouth out! :p

I haven’t read it (or any classic) for years, but it would have to be Dracula by Bram Stoker. Maybe I’m hankering for the days when vampires were soulless demons instead of hot potential boyfriends? Nah, there was a bit of that in Dracula too… 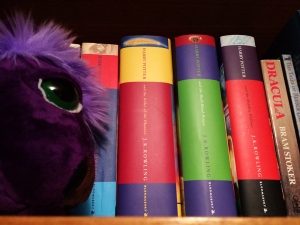 If you want to take part in this tag, then I just tagged you. (It’s TOTALLY legit!)

Are you a coffee or tea person? What books would you have gone with instead of my choices?