← Cover reveal: ‘Branded’ by Katie Hamstead
Update: words to be wary of →

Scary stories, and a giveaway 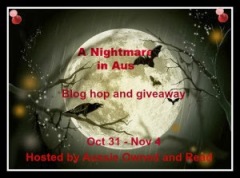 As you may be aware, over at Aussie Owned and Read (AOR) we’re hosting a bloghop called A Nightmare in Aus. Despite the name it’s open internationally, and you can win a bucketload of prices, both at AOR and at many of the participating blogs. There are books, Amazon vouchers, books, writing critiques, and more books!

To enter the AOR giveaway, click here. And to see which blogs are in the blog hop, or to enter your own, click here!

Also at AOR you’ll find a short story — well, more of a snapshot in the unlife of a vampire — that I wrote. Go. Read it. Say nice things. :p

And here is another of my stories, which is less vignette-y and more … well, read it and see.

Word spread faster than dawn light in the little village of Dewdale.

“The ewe had a two-headed lamb! And the old oak by the river was struck by lightening and burned to the ground last night. It’s an omen.”

“Nothing good’ll come of it.”

Before the sun was halfway up the sky, most of the village had gathered before the porch of old Mer’s run-down hut. Mothers clutched babes tight to their breasts, and several of the men held scythes and pitchforks in white-fingered grips. Old Mer, perched on his carved chair, scratched his bristled chin with dirty fingernails and squinted at the group. He hunched forward so that his failing sight could see the farthest of his supplicants. He didn’t let his satisfaction show on his face, which was grim.

The crowd gasped, the sound sibilant. There was a murmur, but old Mer stilled it with a glance.

“What can we do?” one member of the crowd asked, made bold by the fact that he knew this was what the old man wanted to hear.

“The Gods are angry. There must be a sacrifice, or there will be bloody death before the moon is full.”

The mothers held their babies tighter; the men scowled. Old Mer leaned back and stretched his spindly legs out to catch the sun. “Someone appropriate will pass through the village before then.” He knew this to be true; the traders came back from the capital at this time of year, and Dewdale wasn’t far from the trade road.

The crowd was satisfied with this, and dispersed rapidly enough to home and field.

A child was posted near the road to keep watch.

The man and woman didn’t suspect a thing. Coming into the village to seek shelter from an oncoming storm, they found the people of Dewdale were eager to accommodate them. The couple were grateful, for the woman would soon bear a child and found it hard to walk far; walking in the rain would be worse.

“Shall it be the man or the woman?”

“No, the woman. She and the child will be a double sacrifice. The Gods will be happy then.”

“The man will cause trouble.”

“You’re right. Maybe it should be both.”

Warm broth was brought from the kitchen of the village midwife. The rich meaty taste disguised the herbs she had added. Both husband and wife were sound asleep within moments of finishing their meal, the man’s head hitting the table with a thud, the woman’s slipped more gently to rest on her arms.

They didn’t wake when the villagers carried them to the green and tied them like rag dolls, to the hastily erected pyres.

They did wake, briefly, when the flames began to eat their bodies.

“Three of the goats were found, necks broken, near the creek.”

Old Mer did know. Again the child was sent to the road to watch. Traders were plentiful at this time of year.

The woman who was welcomed that night was dressed in rags, and the village was grateful that it was a hag rather than a respectable couple who would go to the Gods this night, to prevent the bloodshed. The midwife watched eagerly as the woman sniffed at the broth, took a sip – and frowned as she placed the cup back down on the table.

“Because I’m allergic to some of the spices in it.” She squinted at the midwife. “But then, I’ve never met a soul who didn’t have a reaction to carronroot.”

The midwife, fearing for herself under the hard stare, cried out. The villagers who’d been waiting for her to call them came charging through the door. They hardly blinked when they saw the hag still conscious, grabbing her by the arms as she struggled to be free.

The screaming would be irritating, but better than the bloodshed old Mer predicted.

The hag’s cries rang out across the village as she was carried to the pyre. Old Mer frowned. He gestured with the burning torch, signalling another villager forward to help.

The third man covered the hag’s mouth with his hand and glared at her. She tried to bite him and, although she had lost her teeth decades before, the slick feeling of her gums on his palm made him pull back his hand with a grimace.

“They will come,” she hissed, her voice penetrating. “The ghosts are angry. There must be a sacrifice, or there will be bloody death before the night is out.”

The villager frowned. The words were familiar. “What manner of sacrifice?”

“The ghosts demand a life. The life of the man who condemned them. They say, should the sacrifice be made, there will be no more omens of death.”

The men who held the hag from the ground carefully put her on her feet and turned to Mer.

The rest of the crowd also turned.

The old man tried to fend them off with the torch, but there were more of them than he could stop.

As the old man burned, the villagers thought they could se a crowd of ghostly figures standing close to the fire, smiling. Or maybe it was just smoke.

When they turned to the old woman for confirmation, she was gone.